The ethos of the student and worker revolt in May 1968 in France was encapsulated by the slogan, ‘Sous les pavés, la plage!’ (‘Under the paving stones, the beach!’). Beneath the surface of a bureaucratic, suppressive capitalist society, which encourages passivity, is to be found a new social order conforming to notions of individual freedom and autonomy. This adage is referenced in the title of Kerry Guinan’s NCAD graduate show exhibition, Beneath the Paving Stones. Significantly ‘the beach’ – the utopian ideal at the heart of the movement – has been omitted.

The work is situated in a room with three immediately striking elements: the walls of the space are blue (perhaps an attempt to move away from the traditional white cube); the floor has been paved almost entirely with bricks, apart from an empty square filled with sand; and there is a blue rope extending across the room, out the window, and onto the grounds of the college (this is the work of Avril Corroon, with whom Guinan frequently collaborates). 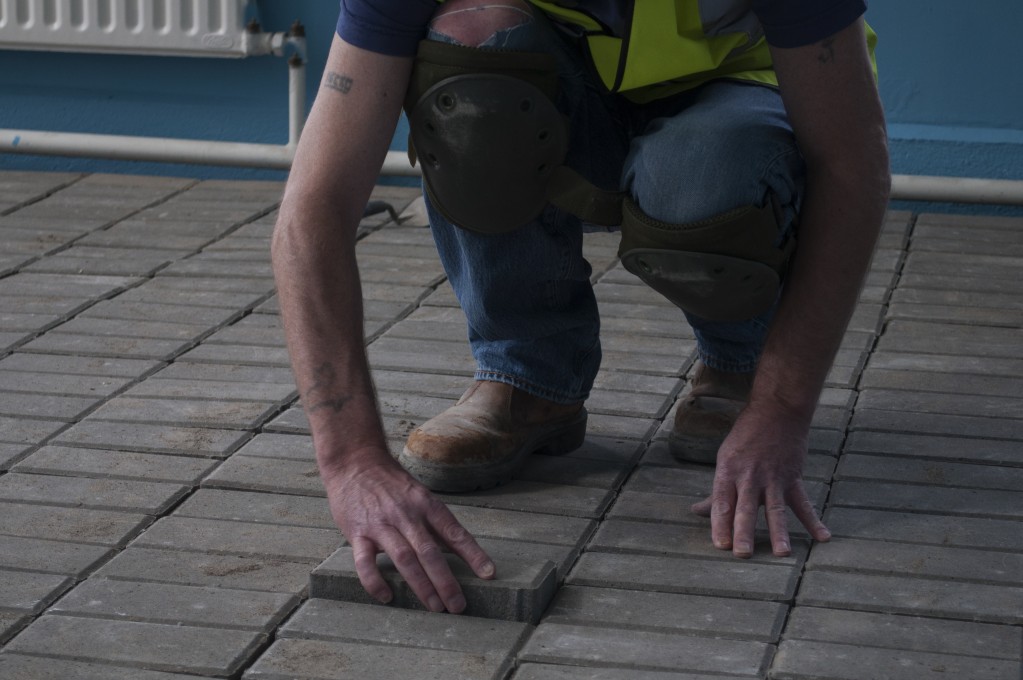 Every day of the exhibition at 3 p.m. a man enters the space, takes a hi-vis jacket from the wall, sets an alarm clock for 4 p.m., and begins a task: he fills an empty square with bricks taken from the paved floor. Once this is achieved another empty square is created, which must then likewise be filled. And so on. This Sisyphean task ends only when the alarm goes off at 4 p.m. The work is physically draining: the effort expended becomes evident in the performer’s declining energy as the task becomes increasing difficult to complete. The clothing worn and the proficiency with which the equipment is used by the performer suggest he has worked in bricklaying or construction. He wears a hi-vis vest, kneepads for protection, and uses a trowel to pick the bricks out of the floor.

Two documents are pinned to the wall. The first is the employment agreement between the artist (employer) and the bricklayer (employee). This details the responsibilities of both parties and reveals that the man hired as a bricklayer is being paid for the work he is doing. The second document is a timesheet where the performer fills in the hours he has worked. On both the timesheet and the contract the bricklayer’s name and signature are reproduced: ‘Declan Walsh.’ There is significance in this subtle detail. By providing the bricklayer’s name, Guinan highlights his individuality. He is present as an individual in the artwork in a way that is not typical of this sort of delegated performance, featuring hired participants who are often unnamed or in some way dehumanized, asked simply to represent their profession, social class, gender, ethnicity, or age group. This is what makes Beneath the Paving Stones striking: the friction between what has developed over time into the methodology of delegated performance and Guinan’s subtle, individualised perspective.

Bertrand Russell defined work as being of two kinds: ‘First, altering the position of matter at or near the earth’s surface relative to other matter; second, telling other people to do so.’[1] Through delegated performance the artist contracts part of the work to a third party, then acts as a director, choosing the time and conditions under which the work will be carried out and governing its documentation. Artists who delegate in this way do so naturally from a position of authority, thereby emphasising the economic disparity between employer and employee. Santiago Sierra for instance exhibited for nearly a decade before delving into his more controversial delegated-performance works. Sierra is paid to create these works, of course, whereas Guinan, as an art student, is not. This endows Beneath the Paving Stones with an original and arresting perspective on capital exchange. 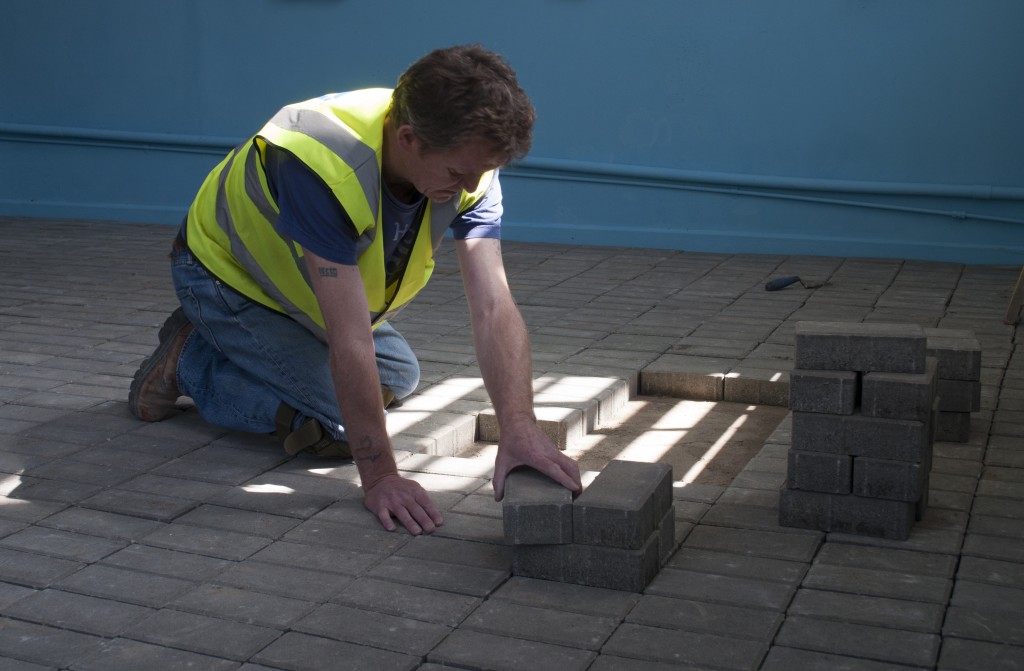 Art graduates today are entering a profession where working for free is to be expected. A study in the Guardian earlier this year reported that 71 percent of artists taking part in publicly funded exhibitions are not paid.[2] From her position as an art student, Guinan is able to comment not only on the nature of labour in a capitalist system but also on ‘art labour’, where artists (particularly young artists and recent graduates) create work more than likely at their own expense.

Rather than simply replicating the now-traditional labour exchange of delegated performance, Beneath the Paving Stones exposes the conditions that make the exploitation of workers possible. Instead of being commissioned to create a work and using part of its funding to reimburse the performer, Guinan pays the wage herself. This complicates the artist-worker relationship. Contrary to the artist taking a clearly privileged position and the worker performing a task, Guinan and the participant both gain and lose in the relationship. In the economy of this work, she is the employer, certainly, but she is not receiving an income and this makes her position financially untenable.

Antagonism is an important quality of performance. Sierra’s polemical practice does not attempt to create a social harmony but instead exposes the unsustainable fiction of this harmony. The non-professionals (or non-artists) hired to perform tasks create a moral unease in the viewer. This unease is vital, making the viewer question the role of art in terms of global capitalism, the moral responsibility of art and artists, and the shadowy power relations at play between institution, artist, and performer. Beneath the Paving Stones never quite succeeds in generating this sense of unease. The relationship of artist and employee is too neatly delineated, too consensual for the viewer to feel troubled by it. Had it been otherwise, of course, more questions would have to be asked of the work itself and of NCAD who facilitated it. Guinan does not go so far as to invite such questions. 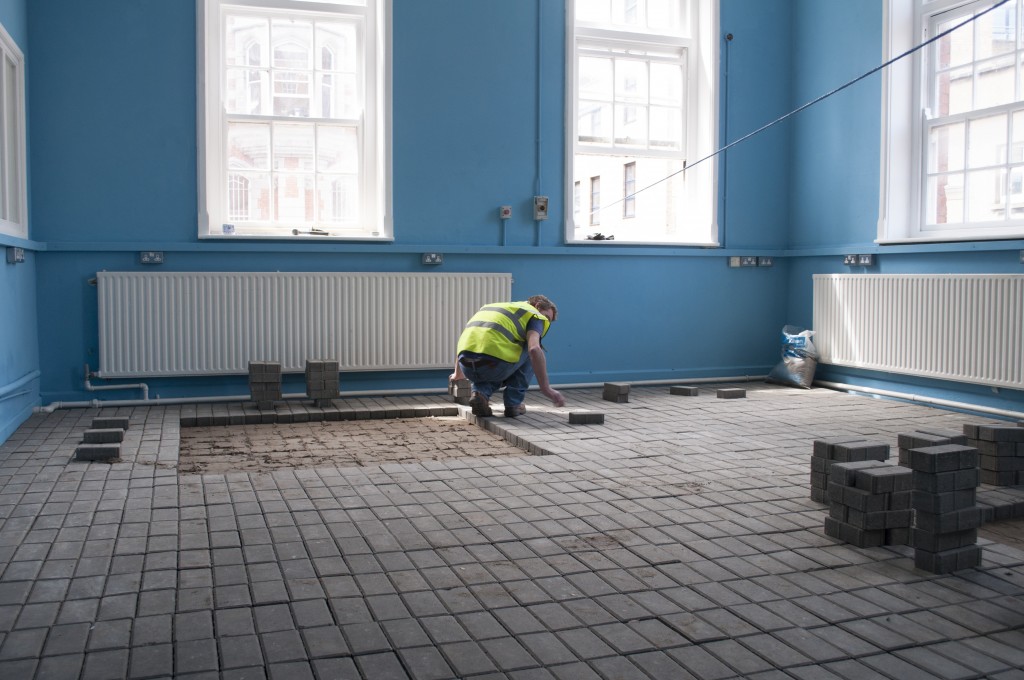 Nevertheless she does manage to highlight the precariousness of the young artist. The artist’s role here, unlike in Sierra’s work, is not secure. Guinan’s work plays on this insecurity, oscillating between a hope for transcendence and a reluctant acknowledgement of art’s inconsequentiality. A similar oscillation characterises Paul Lafargue’s writings on labour. Lafargue, a literary critic and son-in-law of Karl Marx, wavers between two positions – viewing repetitive work as ‘degrading’ but also as a potential means of transcendence:

“The quotidian is on the one hand the realm of routine, repetition, reiteration: the space/time where constraints and boredom are produced … Even at its most degraded, however, the everyday harbors the possibility of its own transformation; it gives rise, in other words, to desires which cannot be satisfied within a weekly cycle of production/consumption … It is in the midst of the utterly ordinary, in the space where the dominant relations of production are tirelessly and relentlessly reproduced, that we must look for utopian and political aspirations to crystallize.” [3]

So what is beneath the paving stones? Given the preoccupations of the work, the reference to 1968 must be read as ironic. The idea of ‘the beach’ has become obsolete and archival. The sand underneath the bricks in Guinan’s show is not a repository of utopian hopes. Instead it evokes the sand as a real substance: severe, coarse, and harsh. The repetitive task by the bricklayer, and the exchange of capital between artist and participant, make clear commentaries on the cyclical nature of the market economy. Guinan’s critique is not simply conceptual; the artwork itself is part of the cycle it interrogates. Even though the title seems to be filtered through an acerbic modernity, Guinan’s preoccupations are not completely removed from the movement of May ’68 after all. The work is not a utopian call for change; rather, it aims to make the viewer aware of the exploitative structures of the capitalist system. 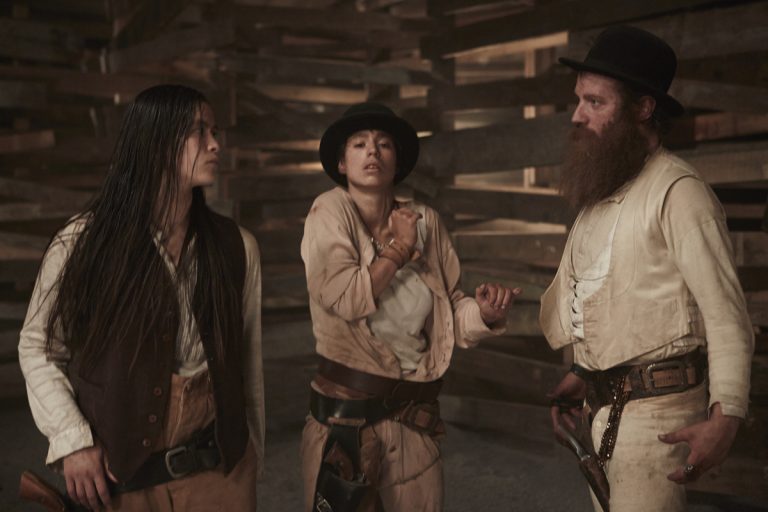