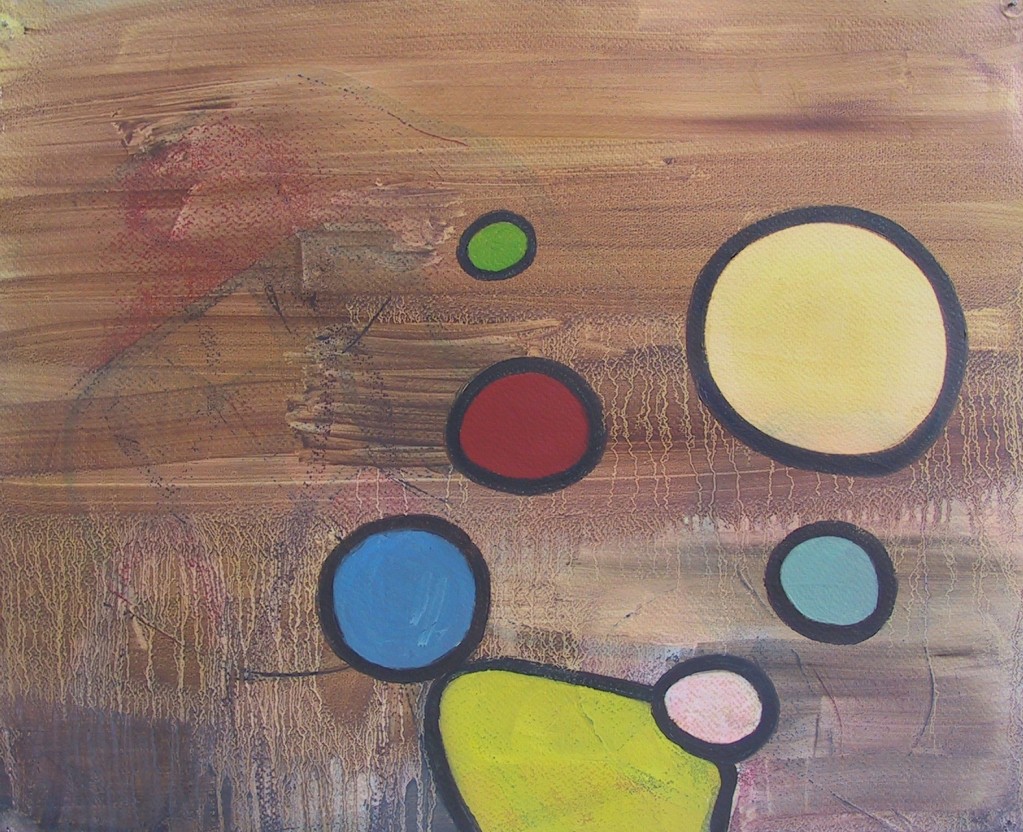 Palimpsest, Hugh Delap’s solo exhibition currently on show at the Talbot Gallery, immediately projects the artist’s concern with colour. Upon entering the gallery space the viewer is met with a series of boldly, and predominantly brightly painted images where abstract shapes hover in their chosen settings. Although not blatantly representative of any objects familiar in our world, the artist does take images and events from his experiences and transfers them to paper in the form of drawings that subsequently influence the paintings. The subject matter of these images, however, takes a back seat when juxtaposed with with the process involved in their making, and the materiality of the works.

What emerges, particularly, is Delap’s decision to leave exposed, rather than cover, the progression of the painterly process. What appears from a distance to be brightly coloured objects set against solid backgrounds becomes, upon closer inspection, bold shapes protruding in the final layer, their predecessors still visible in earlier layers and at times only roughly covered over. 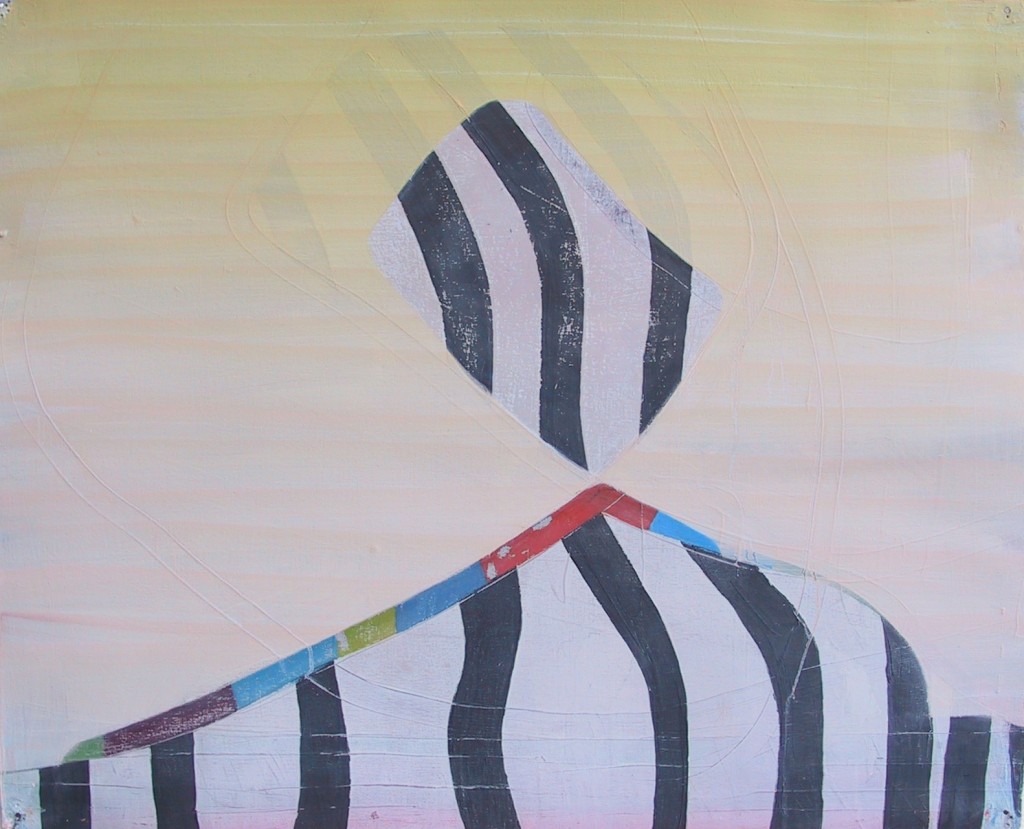 This reworking of canvases is present throughout the history of art, sometimes subtly visible and sometimes only discovered through the use of x-ray technology. In almost all works the re-workings are visible.  This not only adds a sense of depth, but is also a declaration of the different stages each piece has gone through, inviting the viewer to trace and explore the artist’s creative process.

Sometimes the focal object represented was intended to be larger, of a different shape or in a different field of the canvas; in 19-10 a black and white zebra-patterned shape balances precariously on a summit which is covered by a thin band of coloured blocks. The summit, against a pale yellow background, bares a fleeting resemblance to a bizarrely coloured mountain, yet the shape on top is nothing “of our world;” in that, an imaginary object has been strategically placed in what we could recognise as somewhere resembling an earthly landscape. Showing through from under a layer of pale yellow sky the viewer can decipher that at one stage this shape was bigger, the contours stretching further towards the top of the canvas. In 11-09, a swirling black, white and pinkish shape, like a mysterious, weighty creature cruising through murky waters was, in it’s earlier version, surrounded by tentacles, which now barely show through the brown background. 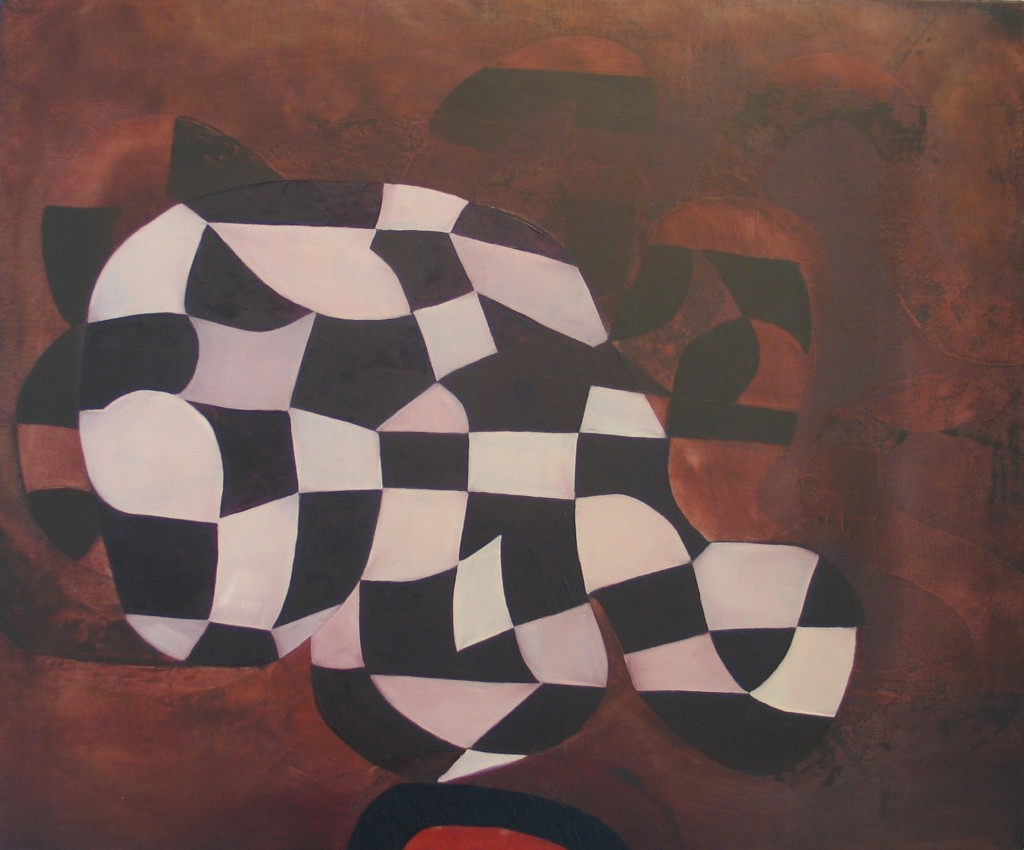 The small physical size of the works coupled with the discovery of these layers peeping through, encourages the viewer to step up closer and engage directly with each piece. One’s eyes skim the surface and it inevitably becomes almost a game to try to decipher what initial image lies underneath and to visualise how the work could have appeared.

The impression given is that Delap himself doesn’t always know how the work will end up; the visual concept evolves spontaneously and organically during the process.

This concern with the painterly process is further emphasised by the visible investigation into the possibilities and materiality of the paint itself. In 14-09, a swirling effect of contrasting colours and patterns, as if a twisting cord has been cut out of an orange background to reveal a grey and black layer beneath, is mesmerising and almost deceitful to the eyes. The shadowy swirls in the background protrude from the depths of older layers. The result is a work that plays particular tricks on our visual sense. The piece is not unlike the two / three dimensional magic eye images. The lower swirls are executed in a paint that dribbles down the canvas, as if melting. The fact that the framed works in this show hover between two panes of glass adds to this illusory effect. 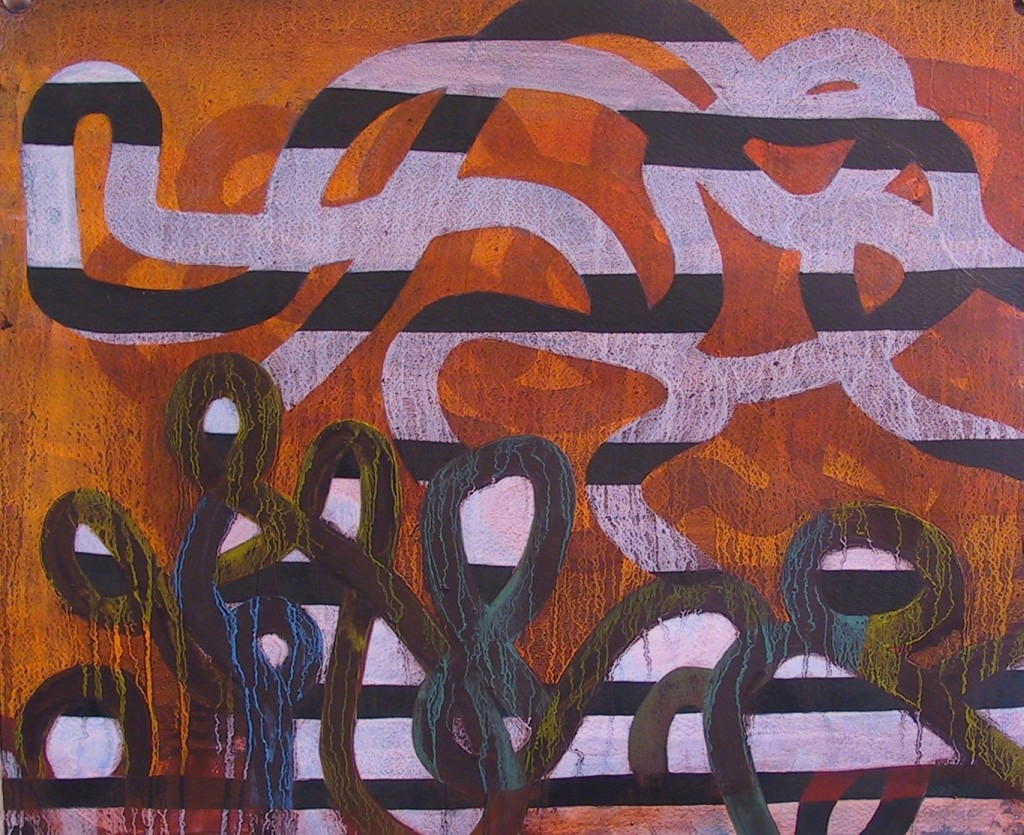 The pieces in Palimpsest bear no titles but are ordered through numerical codes; Delap cites this as a purposeful attribute of his work, allowing us to focus on our own interpretation, our mind exploring and grasping freely, rather than trying to glean our understanding of the work from the label. [1] This show is an invitation to the imagination, drawing attention to shapes, colours, texture and the very procedure through which these images have been generated; we are encouraged to reconsider the potential for referencing the three dimensional through the two dimensional, the possibilities inherent in the application of paint and the drawn out procedure from which the artworks result. 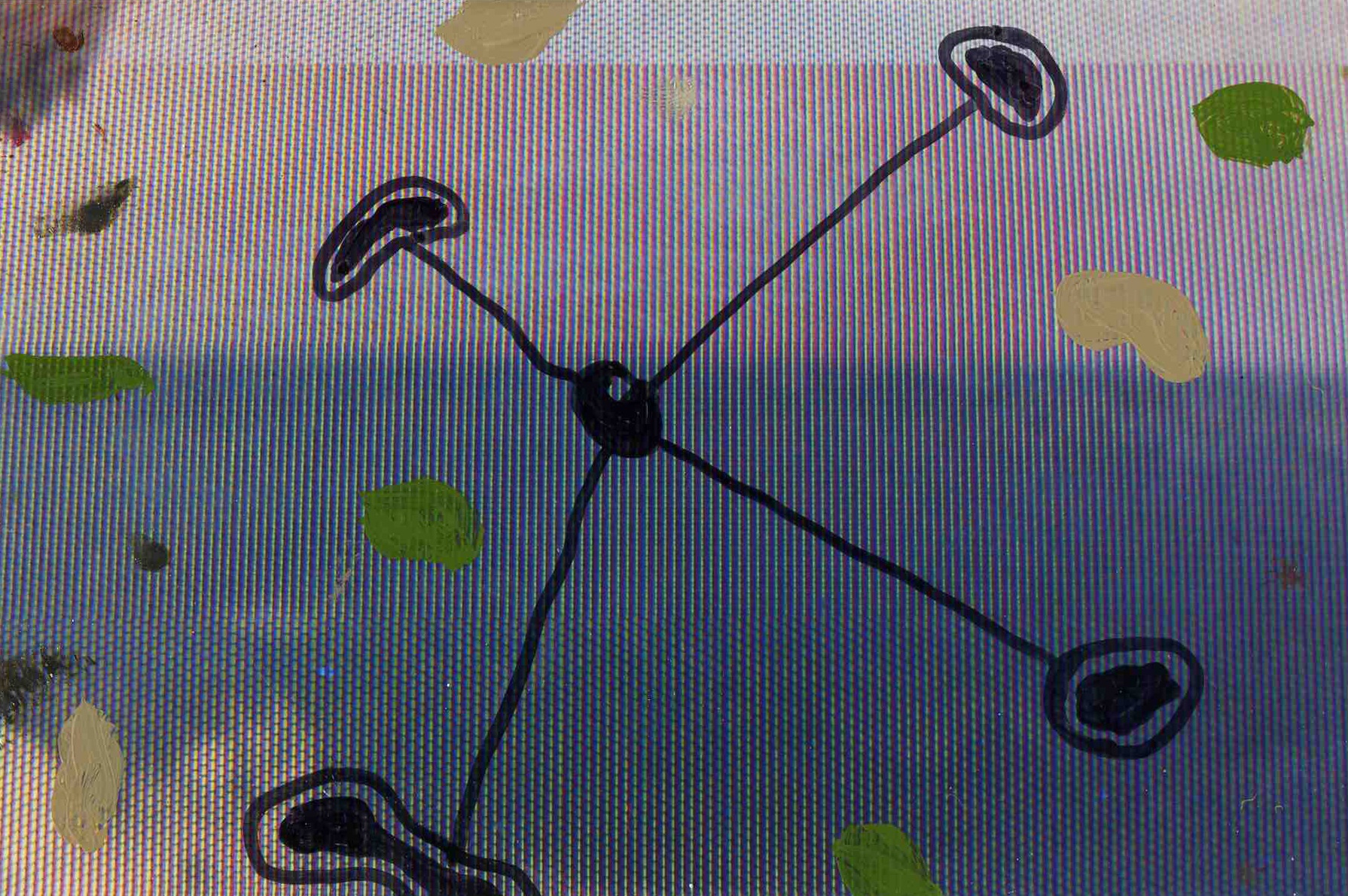 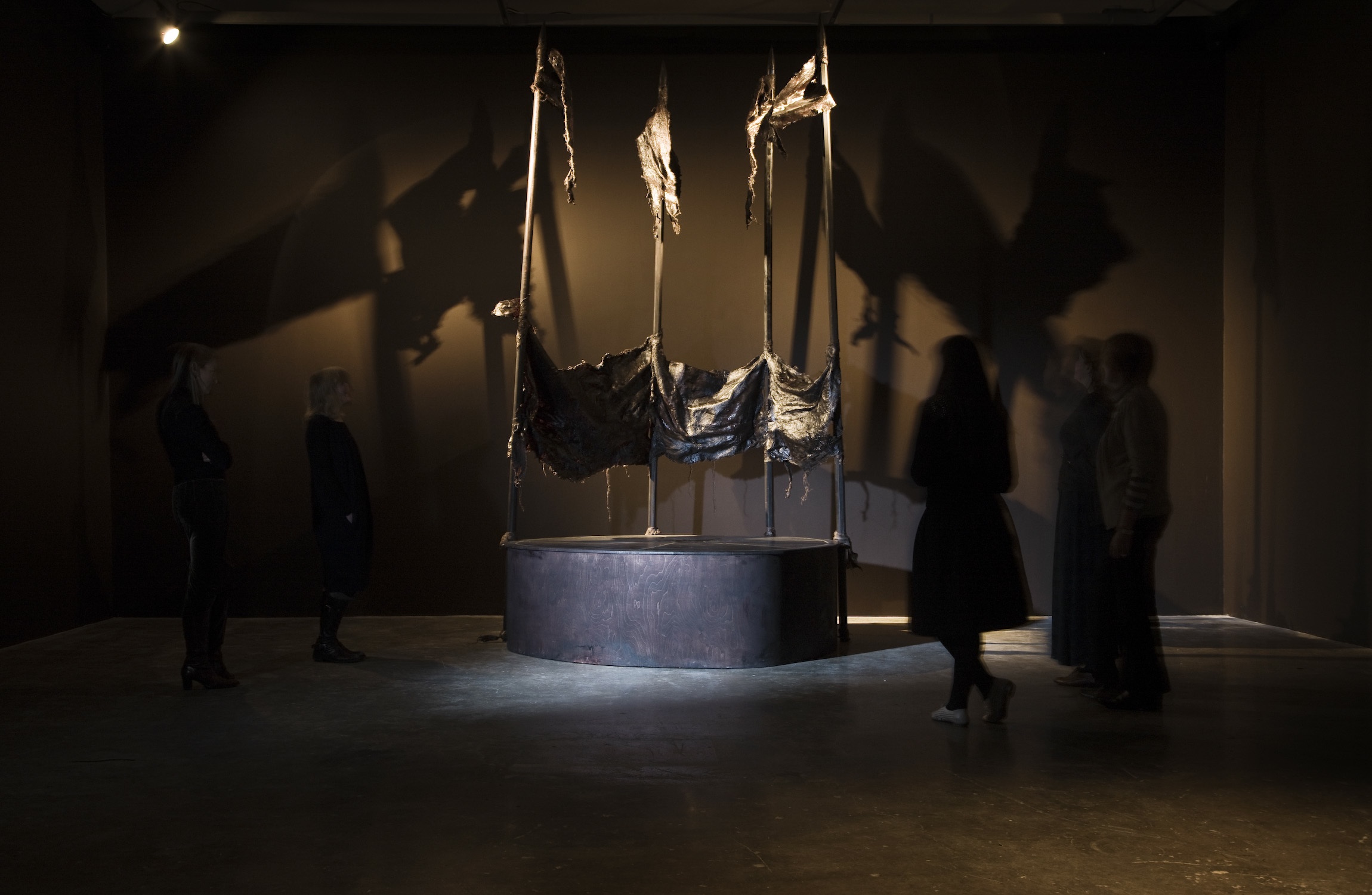