In sunset provision at mother’s tankstation limited, Yuri Pattison expands on concepts previously raised in his 2016 Chisenhale Gallery show, user, space, an exhibition that looked at the role of technologically constructed communal spaces in particular, investigating the impact these spaces have on their users’ personal time. Pattison embraces contemporary infrastructural technology without fetishising it. In user, space a variety of industrial mass-produced office furniture, like faux Eames chairs, and rows of Amazon warehouse shelving were organised in the gallery to present a contemporary office environment, albeit without its inhabitants. In sunset provision this display comprised a more intimate and interconnecting group of mass-produced objects.

Three stacked Perspex boxes and two cream-coloured foam beds were placed on opposite sides of the gallery, while between them hung a pair of opaque plastic dust sheets – one was lit with a video projection of a hallway in the Massachusetts Institute of Technology (MIT), Boston. The installation had the qualities of a lab, and invited a sense of working inquiry. The two mattresses at first suggested a place of rest, but in their arrangement also depicted a position for optimising work. They were coupled with coral-blue LED facemasks, normally used for the rejuvenation of skin. Alongside was an array of travel accessories, fashioned into towers, with USB ports facing every which way. The mass of cables was the veins and nervous system of the mattresses they serviced. 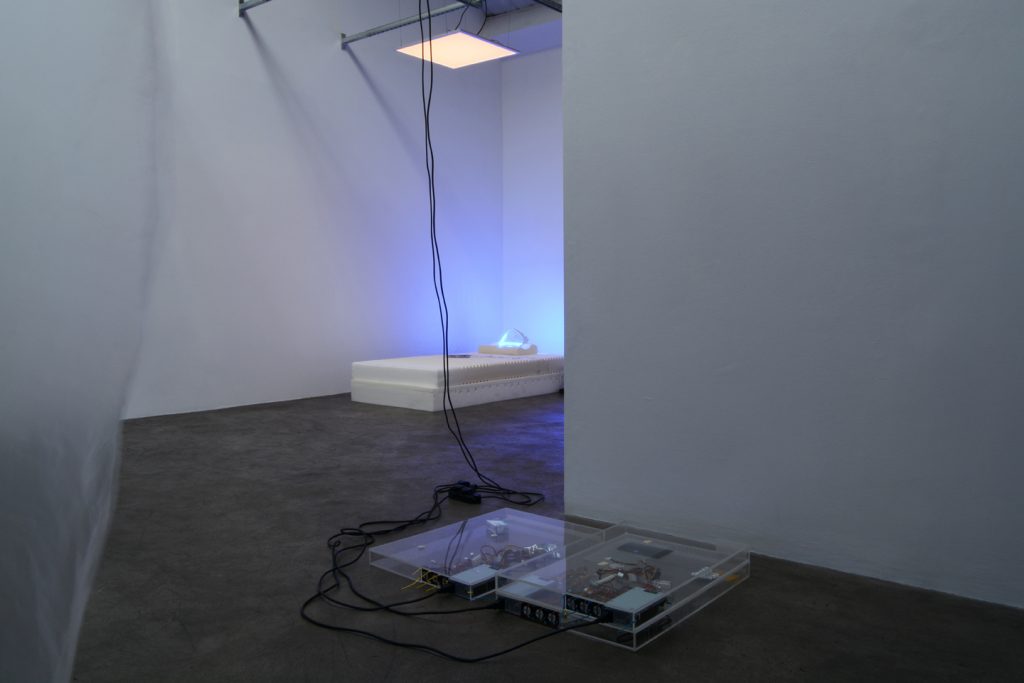 The first mattress, memory foam memory, was surrounded by a white-noise machine that emanated calming sounds to induce power naps, [1] and a melatonin vaporiser that hissed and released translucent mist from its clear plastic bottle – melatonin is an artificially created chemical that is commonly used to cure jet lag. The second mattress, memory foam remembers, revealed a textured surface upon which an android tablet rested, playing a video of MIT’s ‘infinite corridor’. In the 1970s, an architecture student at MIT discovered that in mid-November and at the end of January the early evening sun illuminates this unbroken 826-foot corridor that links the otherwise detached buildings of MIT’s main campus. Its discovery, close to a century after the building’s completion, suggests this cosmic alignment was not part of the building’s original design.

It is this occurrence, filmed by Misha Sra (on 11 November 2016) and Nick Gomez (on 12 November 2016), that Pattison projected onto the dust sheet and simulated on the tablet. The immediacy of this video work was amplified by the short period of time between its documentation and display. The rigid and fixed walls of the corridor became fluid as the projected image rippled on the pearl dust sheet that hung in the middle of the installation. The head-on view of the video work was warped and skewed as the precise angles and lines melted. Contrasts of light and dark appeared among the ridges of colour. In the film, people dash across the view, entering and exiting rooms, some press against walls so as to not obstruct the filming of the phenomenon. [2] The more engrossed the viewer is with the sunlight shafting down the corridor in the film, the more apparent the neo-paganism of the spectacle becomes. The sun, even in the ‘secular’ environment of MIT, is the all-seeing, all-powerful terrestrial body. [3] In sunset provision you can never fully avoid seeing this projection and the sense of surveillance it proposes. 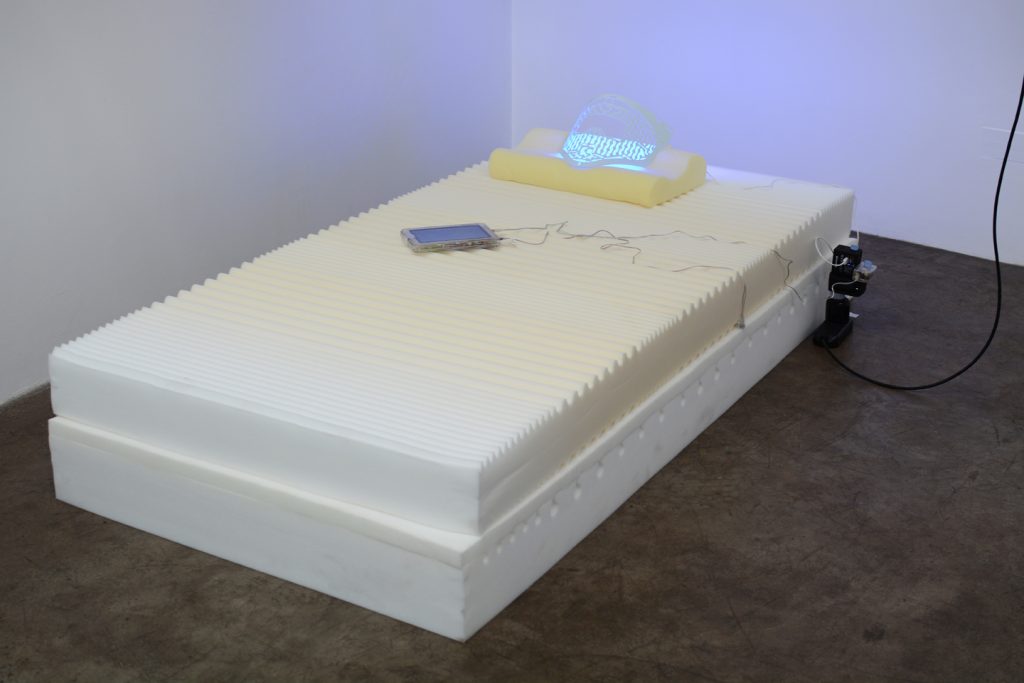 Above the two mattresses, the light was carefully calibrated with a Philips Hue Controller – a device that, according to its manufacturer, ‘will make waking up, working, relaxing or going to sleep better than ever’. [4] It glowed, alternating between a warm orange and a cool blue. The bed, however, would only be occupied if purchased from Amazon; the LED masks would only work once they were bought and plugged in. Both suggested an interaction with certain systems of consumer will and/or habit. Pattison reveals what is ephemeral in the physical while underlining what is concrete in the psychological effects of the physical. With this work, he also holds a mirror up to a deeper personal space: your sleep. Presenting objects in the gallery this way allowed the viewer to become eerily aware of their own passive behaviour, too. Pattison invited the viewer into the space through these objects and the sense of personal dependency they suggested, while also providing the data required to question the modes of contemporary work and rest. In doing so he emphasised his role as an artist rather than a direct social commentator. 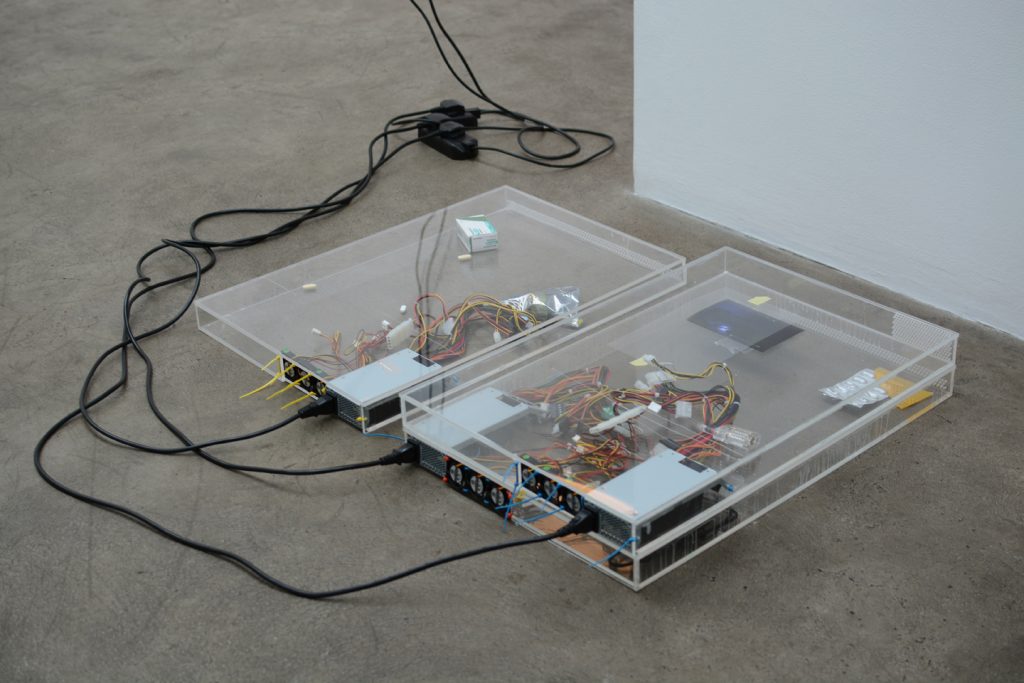 The black cables that powered the works snaked back to three transparent locked boxes, stacked on the right side of the gallery floor: dust, scraper, fan 2.7 (winter); dust, scraper, fan 2.8 (productivity); and dust, scraper, fan 2.9 (stack). Their agglomeration directly on the floor asserted them as sculpture, and to inspect them the viewer had to hunker down and cede an elevated and comfortable position – to almost kneel in front of them. Within these Perspex shells were the red and yellow server cables, blue cable-ties, and fans. Among this hardware were prescription drugs, Piracetam and Modafinil: the former is used to reduce muscle twitches and the latter, developed to cure narcolepsy, is also commonly sold over the counter to improve cognition. The servers are the brain of the work. The servers’ fans were inverted and inhaled rather than exhaling air from the boxes. Traces of the exhibition’s visitors became trapped inside. Like a data store, it increased each day. By these means, a profile of its audience, and by extension the modern user, was built up over time. [5]

Aidan Kelly-Murphy is a writer based in Dublin.

[1] White-noise machines often actually produce ‘pink noise’ instead of ‘white noise’ as it is deemed more calming and less jarring to the ears.

[2] MIT has a code of conduct for how to behave during MITHenge, referred to as ‘MIThenge etiquette’, which can be viewed online: http://web.mit.edu/planning/www/mithenge.html.

[3] In the accompanying exhibition text, Pattison draws attention to the Silicon Valley practice of purchasing a start-up and then draining it off its viable resources, be they patents, software, or people, and then folding it. Referred to as ‘sunsetting’, it is more akin to a commercial and intellectual black hole for the smaller partner.

[5] Pattison executed a similar theme for his winning proposal for the 2016 Frieze Artist Award, Insights (crisis trolley), which captured data from the fair environment as well as the ‘Internet of things’. 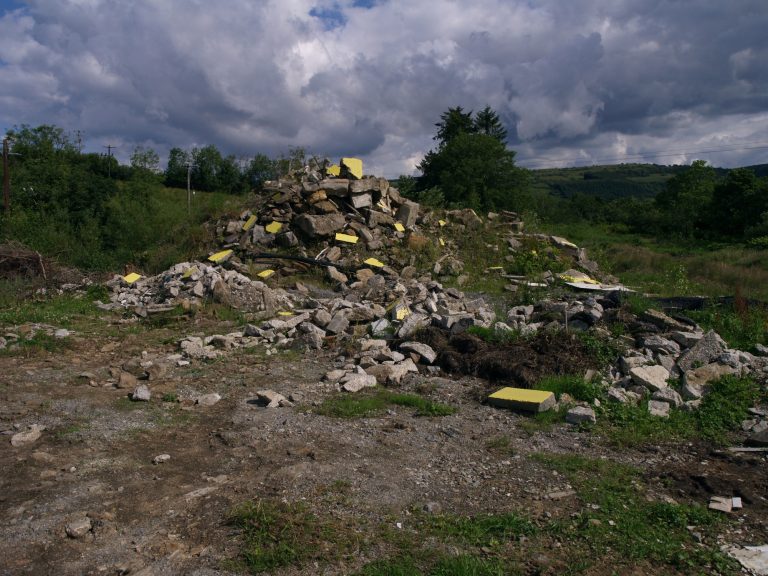 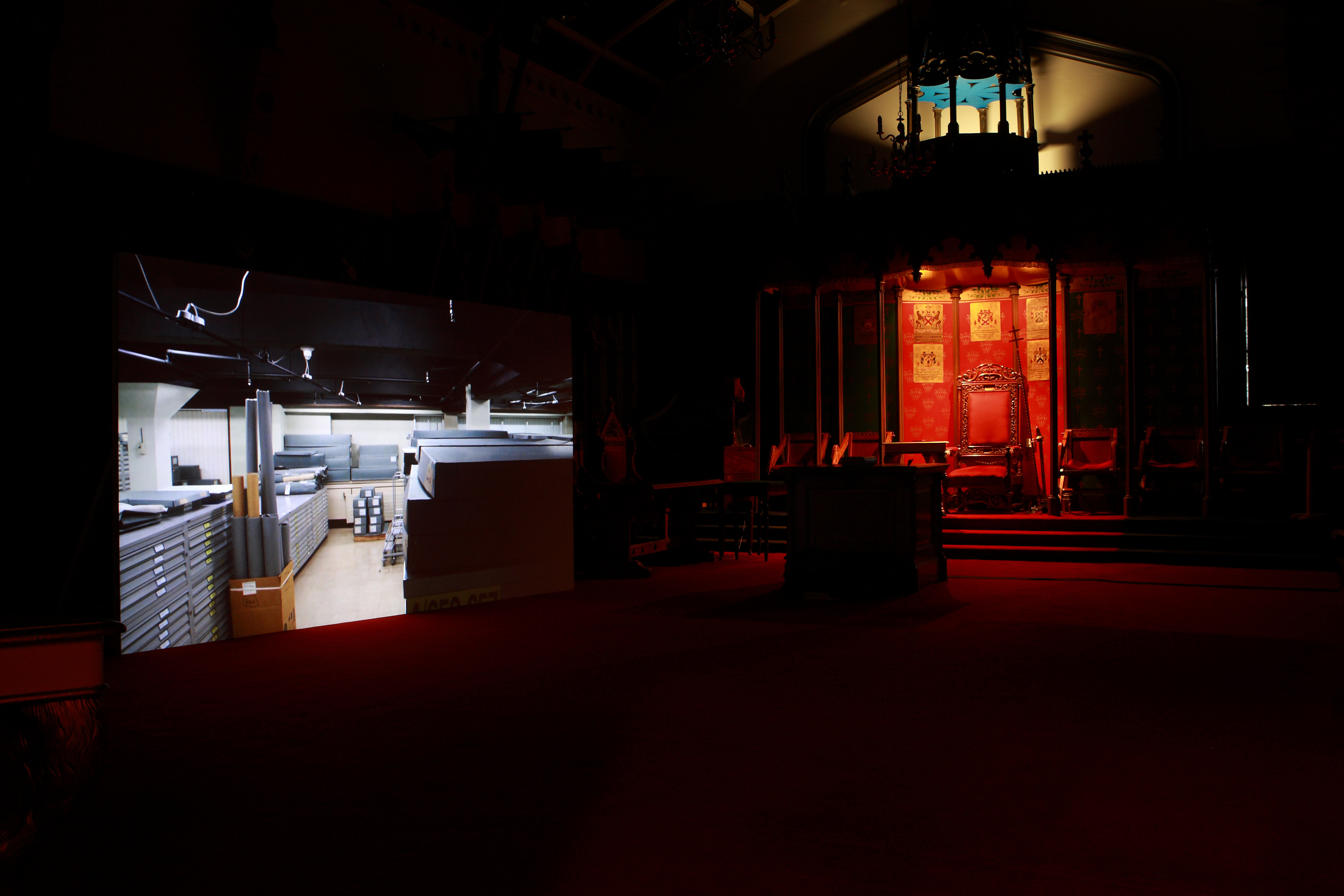