Despite its title, an air of distinct creepiness permeates the skies will be friendlier then, an exhibition of six new two- and three-dimensional works by Eoin McHugh at the Kerlin Gallery, Dublin. In comparison to his last major exhibition in Ireland, Augury at the Douglas Hyde Gallery in 2013, in which a surfeit of works occupied the space, the skies will be friendlier then benefits from a sense of economy. Through his work McHugh investigates the ways in which the mind processes imagery, and with this show he allows more room for the viewer to encounter and process not only the artworks themselves but also ‘the space[s] between the image[s], the object[s] and the idea[s]’ where McHugh’s interests ostensibly lie, enabling the full complexity of the works to emerge. [1] 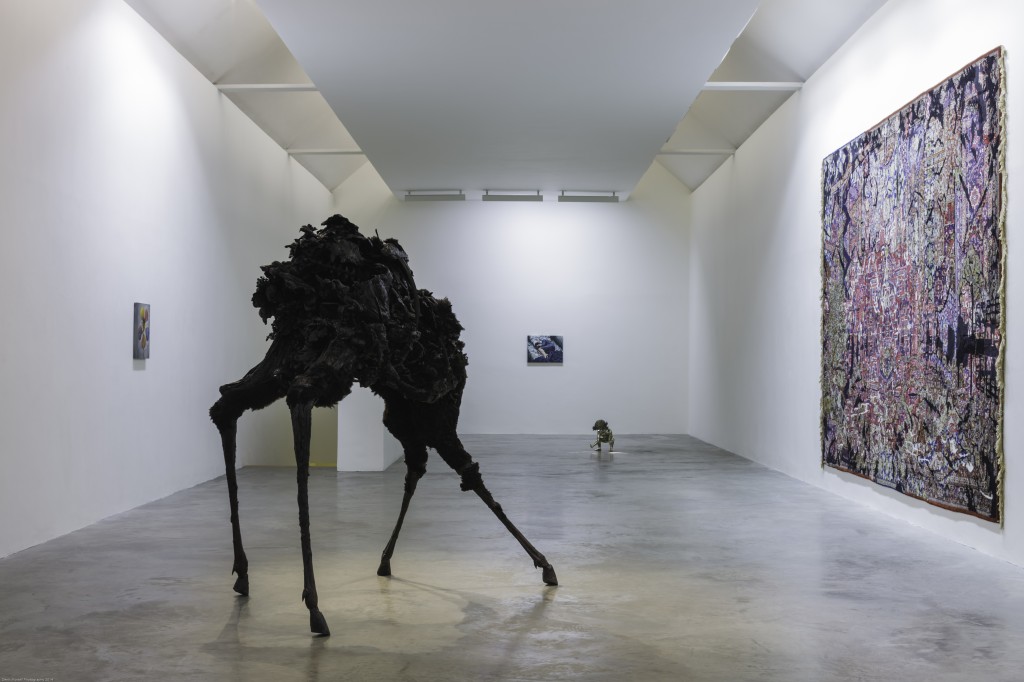 This is an exhibition of both technical and conceptual complexity, including impressively crafted sculptural and textile works underpinned by serious inquiry into ‘the history and aesthetics of psychoanalysis and the poems of Wallace Stevens and Seamus Heaney’. [2] Yet the most powerful and lingering effect of the exhibition is less cerebral than atmospheric. The work inculcates an otherworldly, almost nightmarish atmosphere within the gallery space. In the skies will be friendlier then McHugh stalks the fringes of the imagination, presenting work that is at once oneiric and ominous, provoking an ambivalent, tense emotional response, treading the faultline between awe and revulsion, the unusual and the grotesque, reality and imagination.

This contrast is exemplified by the two sculptures in the exhibition, both tinged in different ways by a sense of the freakish. The first and larger of the two, extending above head height, the ground itself is kind, black butter (all works, 2014), is monstrous not just in scale. The flesh of the swollen belly of this tall horse-like figure’s headless torso is exposed. Hardened muscle-like strips of stretched wax are partially covered with black sheep’s wool, resembling a burnt carcass rising from a ghostly abattoir, with buckling equine limbs that ironically emulate the tentative first stretch of a young colt, learning to use its legs.

On the far side the belly opens up, showing its black interior of bulbous unidentifiable forms, berries on branches and rib-like bones piercing through the skin of a forbidding figure – cavernous, malformed, grotesque in the original sense of the word (from the Italian, grottesco: ‘of a cave’). It is as if some macabre creature of the imagination has been given material form. Its botanical components both relate to and contradict the ‘hyper-real/hyper-surreal’ plant forms of a nearby painting, wire mother, which depicts five bulbous, pod-like forms in unusually bold colours: yellow, red, blue, orange and purple. They are like psychedelic poppy-seed pods, familiar yet peculiar, resembling growths from an imagined world, or mutations from a distorted version of our own.

The skies will be friendlier then engenders a sense of primal terror, evoking memories of childhood fears of monsters. This capacity to scare is bolstered by an extensive intellectual engagement with the history and aesthetics of psychoanalysis. Two large tapestries hang on the gallery walls. These tapestries are made from segments of patterned Persian and Turkish woolen carpets, meticulously pieced together in various relief to form a giant textural collage. The pale blues and whites of what we know in what we see are like the mottled cumulus clouds of an undecided sky, coiling in black wisps around the black, red and burnt umber shapes that could be a city skyline of a far-off place or an island floating between the indistinguishable pallors of sky and sea. The other tapestry, the skies will be friendlier then, through its harsher black and red palette and geometric shapes, seems ironically less friendly.

It is not incidental that the title of the first textile work – what we know in what we see – reads almost like an invitation to a question: what do we know in what we see? The appearance of these works echoes the now rarely deployed psychoanalytic tool, the Rorschach (or inkblot) test. They don’t depict any obvious narrative as traditional tapestries might: castle wall hangings, for instance, used to depict heroic battles. They are imbued with such resonances, certainly, but, in their present form, absent of obvious narrative, they seem if anything more portentous. In this respect one could link the title of this exhibition to the conceptual lynchpin and title of McHugh’s last exhibition at the Douglas Hyde Gallery. If Augury referred to the ancient practice of interpreting omens from the flight of birds, the skies will be friendlier then anticipates instead the results of interpretation. Both exhibitions turn upon the axes of preexisting interpretative models and both draw succour from older methods of analysis, but while the former related to the concrete signs of nature, the present exhibition delves into those of the mind.

The titles of the two other works in the exhibition contain even more explicit reference to the history of psychoanalysis. A painting of a woman on the back gallery wall is entitled song, wandering womb. The ‘wandering womb’ is a reference to a folk belief, originating in ancient Greece and co-opted by Freud to illustrate his theories of hysteria. The painting depicts a woman curled into the foetal position on her bed, bubbles and ripples distorting the flesh on her legs suggesting she is submerged under water. She is cowering away or crying, the water overcoming her, her body succumbing, hiding from some terror that lies around or perhaps within her, precisely the kind of terror evoked by the other pieces in the room. 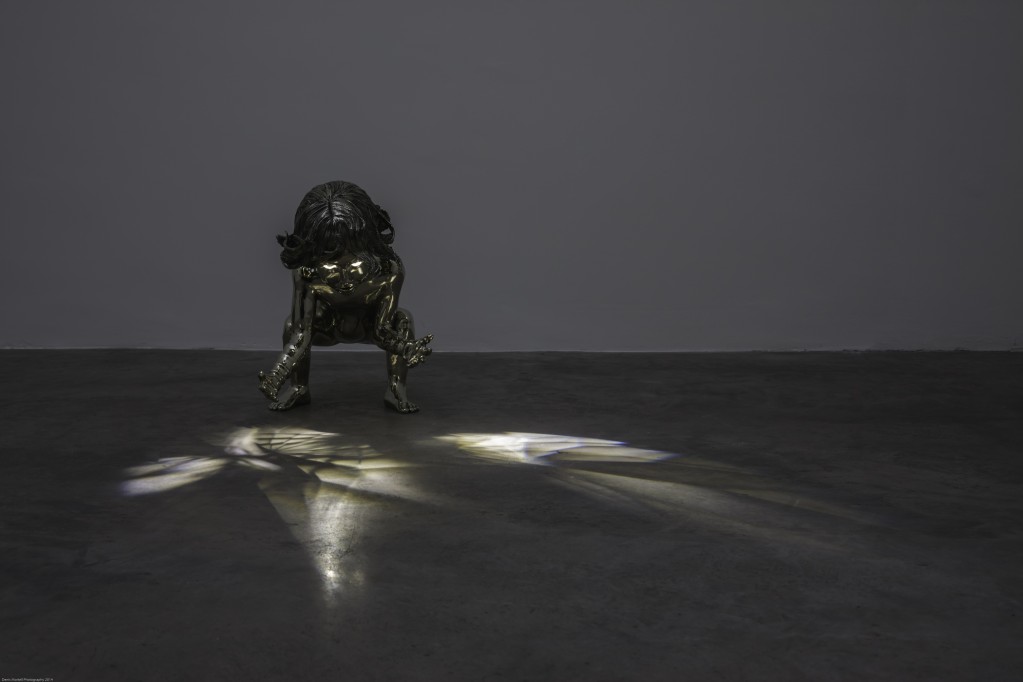 This portrait of distress serves to heighten, by contrast, the sense of childhood innocence and naivety encapsulated by the second sculpture of the exhibition, a little silver cherub-like child, little Hans nightlight. Little Hans was the subject of one of Freud’s most famous case studies: a young boy who developed a phobia of horses. Freud used Hans’s symptoms to support his theory of the Oedipus complex, positing the experience of unconscious conflicting desires towards one’s parents during psycho-sexual development. McHugh’s little Hans is crouched down, arms outstretched in a quaint gesture of fascination, staring at the geometric shapes of light cast from his own eye sockets onto the ground in front of him, oblivious to the monstrous horse-like figure towering nearby. His arms are distorted, ridged like a serpent, a mutation upon his otherwise smoothed, idyllic form. The serenity and wholesomeness of his presence in the room is thwarted by his physical deformity, turning him into an ambiguous creature, an inhabitant of a world like ours, but not quite.

In the skies will be friendlier then, McHugh presents objects, images and ideas which intersect with and interrogate the viewer’s processes of interpretation and imagination. McHugh’s work prises open the spaces between intent and interpretation, creating a new terrain of gaps and disjunctures, revealing a space of fruitful, disconcerting ambiguity. The result is an exhibition charged with a potent sense of otherworldliness in which reality and imagination become inextricably enmeshed.

Sara O’Brien is a writer based in Dublin.

[1] Press Release: Eoin McHugh, the skies will be friendlier then, Kerlin Gallery, 2014. 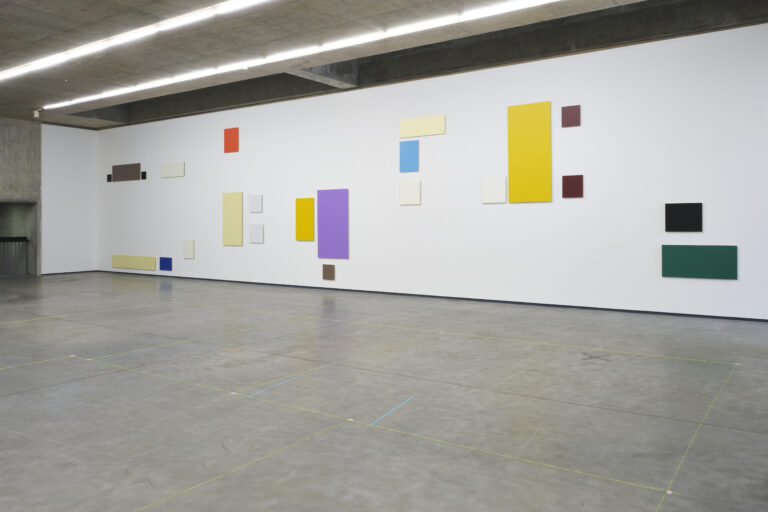 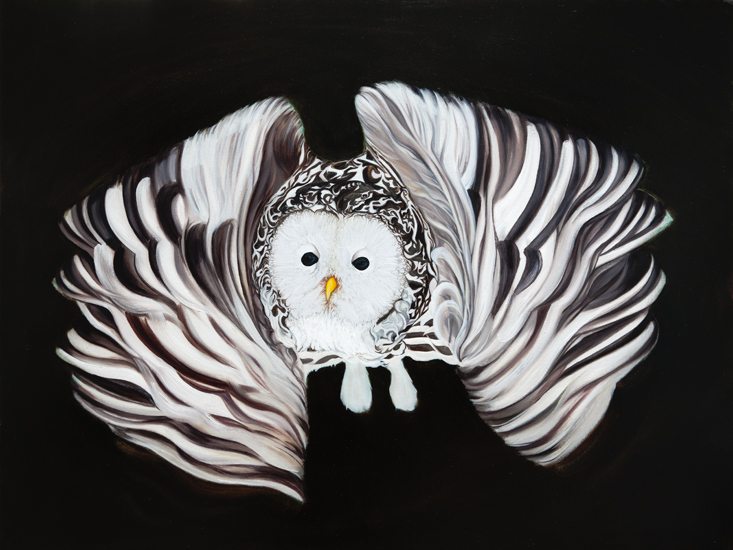