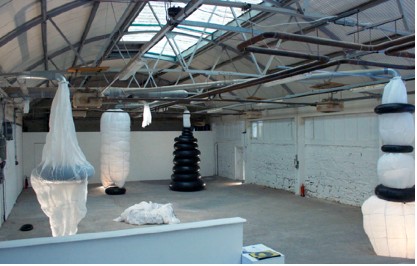 In 1926 Alexander Chizhevsky, a Russian scientist, produced a text titled: The Physical Factors of the Historical Process. It generally posits the idea that the biosphere, and by extension human life on earth, is directly affected by the cycles of the sun. He correlated the human history – of war, migration, et cetera – with the corresponding documented solar activity.

His writing is a point of influence for Ella Burke’s new work, Silent Vibrations, recently on show at IMOCA (Irish Museum of Contemporary Art), Dublin. Burke, who is a graduate of the I.A.D.T. Visual Arts Practice degree and currently studying on the MFA program at NCAD, presents this work as a culmination of a year-long graduate programme, awarded to her by IMOCA in 2009.

IMOCA is located on Lad Lane, Dublin 2, in what was an old OPW (Office of Public Works) joinery. The building is a large, open, industrial structure, which now houses studios and a two-tier gallery space. 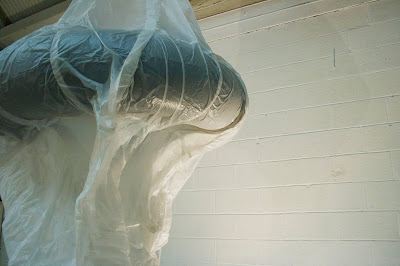 Burke’s work utilises the entirety of this gallery space. On the lower tier five long, large, white, amorphous sacks dangle from opes in the dust extractor pipe network that winds its way amongst the steel trusses overhead. Some of the sacks – made from plastic bags that have been glued together – are constrained by inflated rubber tyre tubes. Fans have been fitted into the overhead pipes creating a sort of closed system of pneumatics that slowly inflate and deflate the dangling, synthetic lungs. These heaving shapes, are defined by the confining rubber-tube-structures that are suspended at different heights along the dangling sacks, which alters the inflated shape; that at once avoids designation and yet, expresses the space between structure in a languid way.

These uncertain objects seem to reference, or act as a re-wording of, the Atkinson and Baldwin Air and Air Conditioning exhibitions in the late 1960s – where it was suggested, that a volume of air-conditioned air should be considered as an art object. [1] 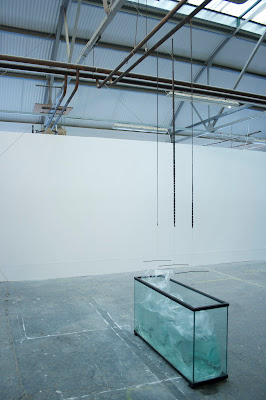 The upper tier houses a number of smaller, mostly static sculptures. Equilibrium: three open sacks of water held within an open topped cuboid vitrene. The sacks are restrained in the vertical direction by three copper and rubber harnesses and in the lateral direction by each other. It expresses a co-dependence between the sacks, and, it slows the sculptural fluid from: air to water, thus introducing a sort of statis.

Physical Factors of the Historical Process comprises a suspended, black, steel cuboid frame, within which is suspended a hexagonal shape, within which traverses horizontal strands of copper. Filter, alongside it, comprises a suspended mask-like shape of wire mesh, through which passes a torrent of copper wire. The wire enters in a disordered gush and leaves in an ordered, downward, regressive stream.

Monument to Social Networking Site is a copper wire sculpture, where strands of this copper again are drawn at an angle from random points on the roof structure, through a twist and down to the floor slab, where they ultimately describe a circle. It is as if the point of twist has acted as a filter between the random and the ordered, and it is reminiscent of Tatlin’s much-referenced Constructivist Monument to the Third International. 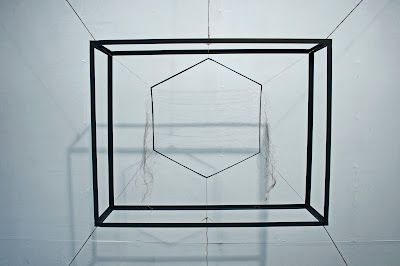 The recurrence of material seems, at first, almost dogged, however, it is the variation in which these recurring materials are used that lifts the work from being just illustrative. The interaction with the existing services of the building (pipes, vents, etc.) and its structure gives this work a further layer, while also adhering to the overall concept; by bringing the architecture of the building, the architecture of the inflating / deflating totems and the architecture of the Monument to Social Networking into a co-existence. For example, marked out on the floor slab of the upper tier of the gallery are old, yellow spray-painted markings of a layout for a residential apartment. This OPW building was, at one stage in its recent history, to be knocked and re-developed. Burke brings these historical relics of an external idea into the work with careful, subtle placement. 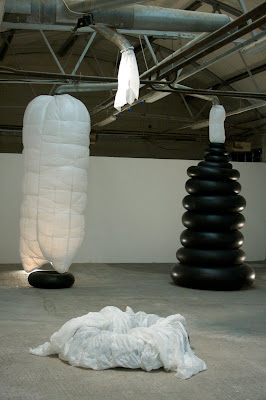 The separate clustering of the kinetic and the static sculptures provides a sort of cyclical, visual and conceptual pneumatic. The exchange of conceptual thrust between these two tiers and the ephemeral interaction with the building, physically, while infusing it into the concept, is graceful, ambitious and brings to reference the Victor Burgin essay, Situational Aesthetics:

Accepting the shifting and ephemeral nature of perceptual experience,
and if we accept that both real and conceptual objects are appreciated
in an analogous manner, then it becomes reasonable to posit aesthetic
objects which are located partly in real and partly in psychological space. [2] 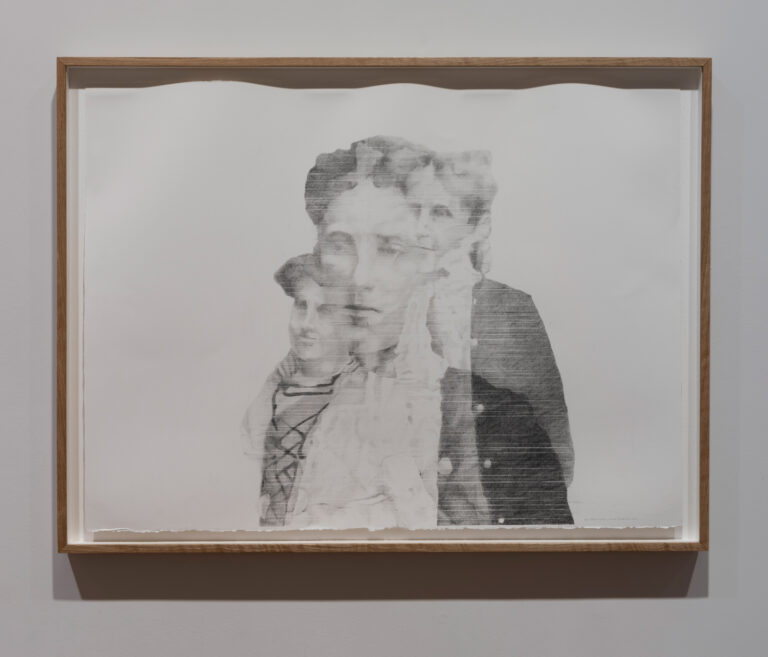 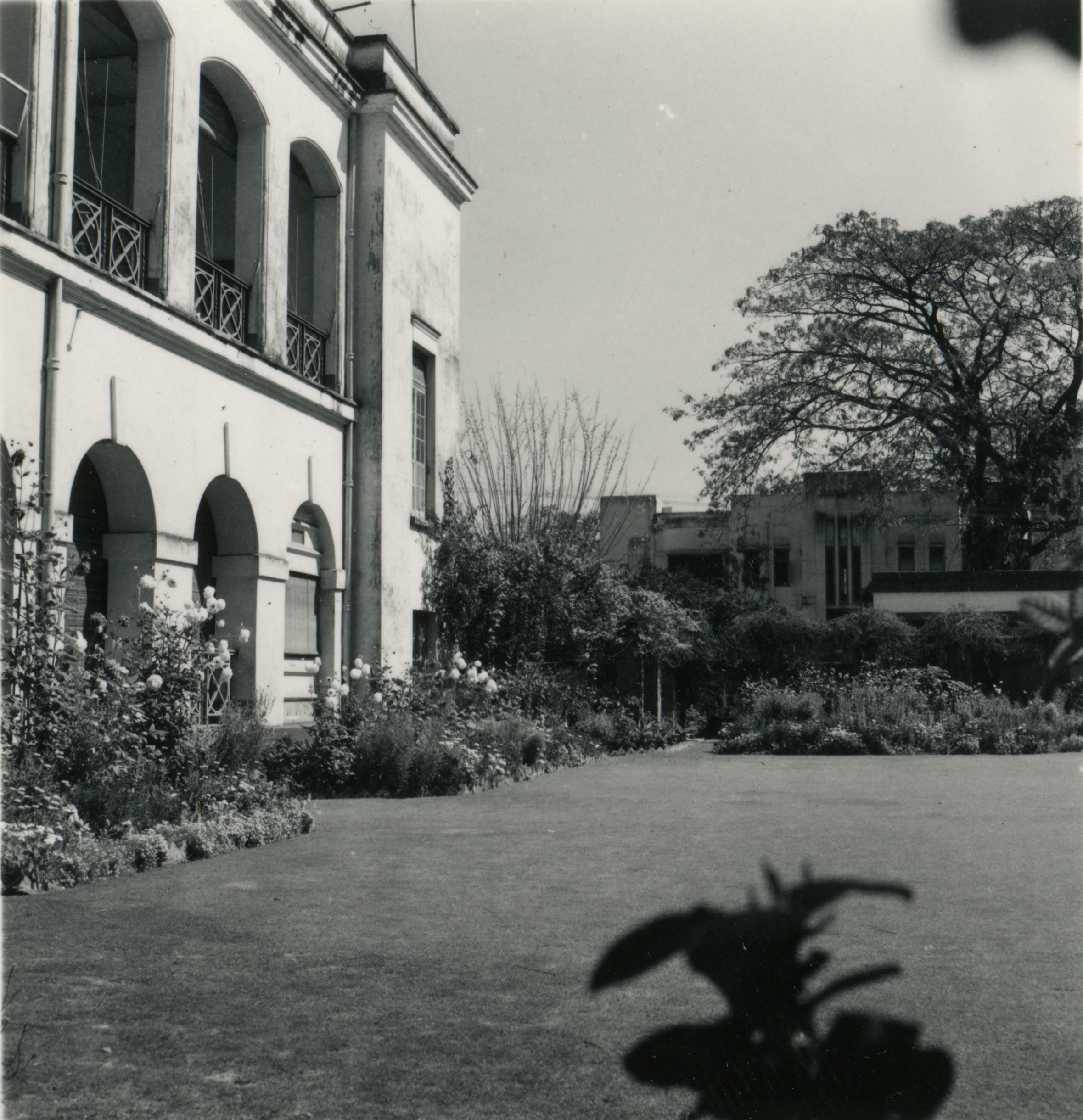 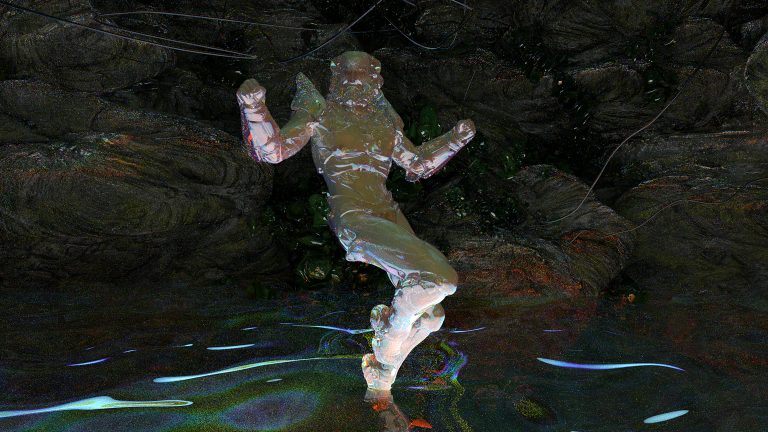