In 2005, after a decade of producing oil paintings, I began making small assemblages out of disposable packaging, objets trouvés, gesso, oil paint, relief prints, photocopies, and photographs. These objects bridged the gap between my stopping painting and my starting to write various forms of fiction. It was out of this fictional turn that my work folded in on itself, and later I started incorporating into my texts images of some of these assemblages, which I had banished to the quiet desperation of some shoe boxes.

I was making these assemblages that I considered to be the waste product of my turning away from the louche, lavishly atrophic, surfaces of my paintings. Having neither the necessary professional connections or qualifications, nor a commercial or critical track record, there was little hope of my ever formally exhibiting these assemblages, or of my using them as the basis for availing of state funding, or of them ever being purchased by an institution, investor, or collector. They were not, in the language of art, exploring, interrogating, or elucidating failure, but deliberate admissions of, and – as I would later realise – admissions into the bracing world of, failure. Opaque and congenitally obtuse, only the dark arts of textual fabrication offered the possibility that some semblance of life might be breathed into their coarse agglomerations of contractions, circumscriptions and contradictions.

Interned in their shoe boxes, my assemblages inhabited a form of suspended animation. I saw them, increasingly, as liabilities, yet I could not bring myself to write them off. Tethered to the disposable physicality in which they had been left to fester, implausible connections attached themselves to these works. Negative connotations grew on them like mould on a shower curtain. They cracked and split open. They frayed and fell apart at the seams.

In 2008 I returned to them. The most striking thing about them was that I no longer viewed them as liabilities, but as a renewable resource. Faced with a choice between trying to deploy them as works of art and putting them permanently beyond use (which may amount to the same thing), I chose instead a form of inverted asset-stripping, placing my assemblages into a conceptual clearing house, where through creative accounting I could transform them into a portfolio of assets and utilities.

Renouncing integrity, recognition, validation, I returned to my assemblages to recalibrate their invisibility, and to exit, temporarily, the steam rooms of my pursuit of substance. Sheltering from the dark matter of galleries and museums, bursaries and residencies, awards and grant applications, I descended into a revitalising plunge pool of introspection. 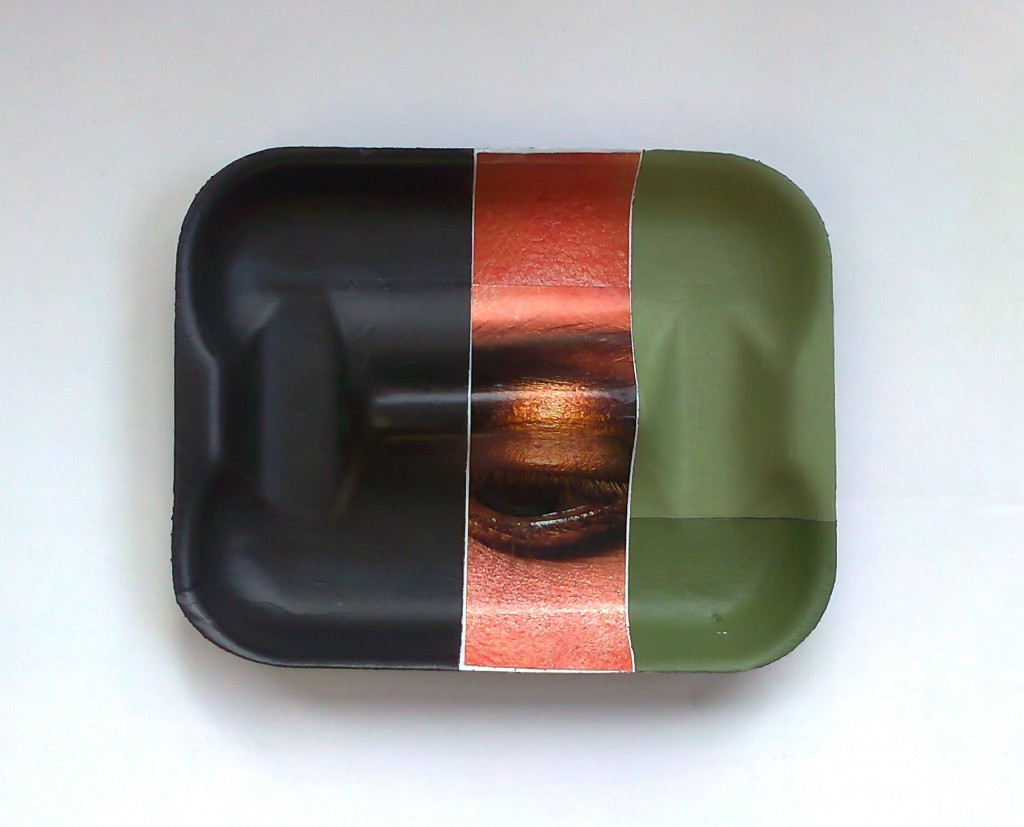 The bulldozer approaches us head-on. Only the blade is visible. Opposing sides pull back across the blade’s working surface to reveal the opulent, quixotic vista of a half-closed eye. The somnambulant eye gazes downwards, as the false dawns and gilded horizons that shape the tapestry of our expectations are bulldozed into oblivion. The sides could also be approaching each other, coming together in a virtuous vice that crushes the eye and the glittering lid in its jaws. 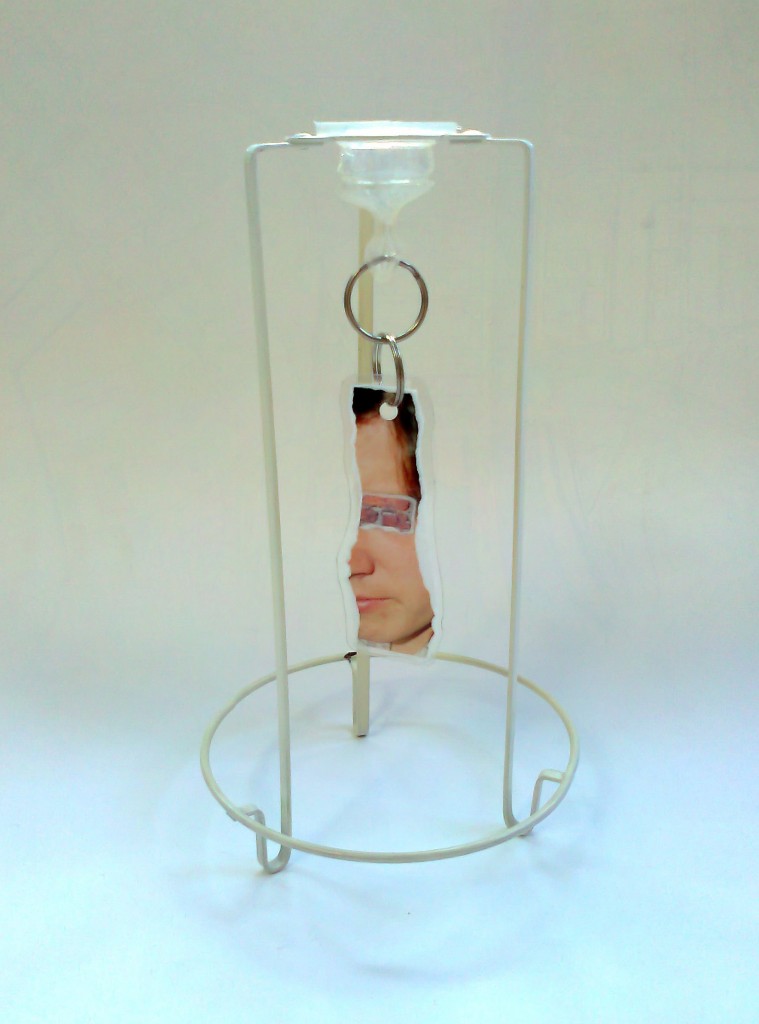 Hang on a moment

An inverted lampshade harp provides a readymade scaffold. Within the transitional space of its inversion, the artist’s torn face hangs, tight-lipped, eyes covered up, sockets bricked in. The two key-rings attached to a pierced silicone teat remind us that like birth, creation is not a choice, but a series of needs through which we are pulled from the insularity of the womb, and hurled against the world’s hostility. Whatever succour is on offer must be forcibly extracted. The embryonic interior of this scaffold is haunted by the dead weight of a spent force: a torso that pulls the hanged man through the hollow-headed, limbless body of his suspension, into reclusion. 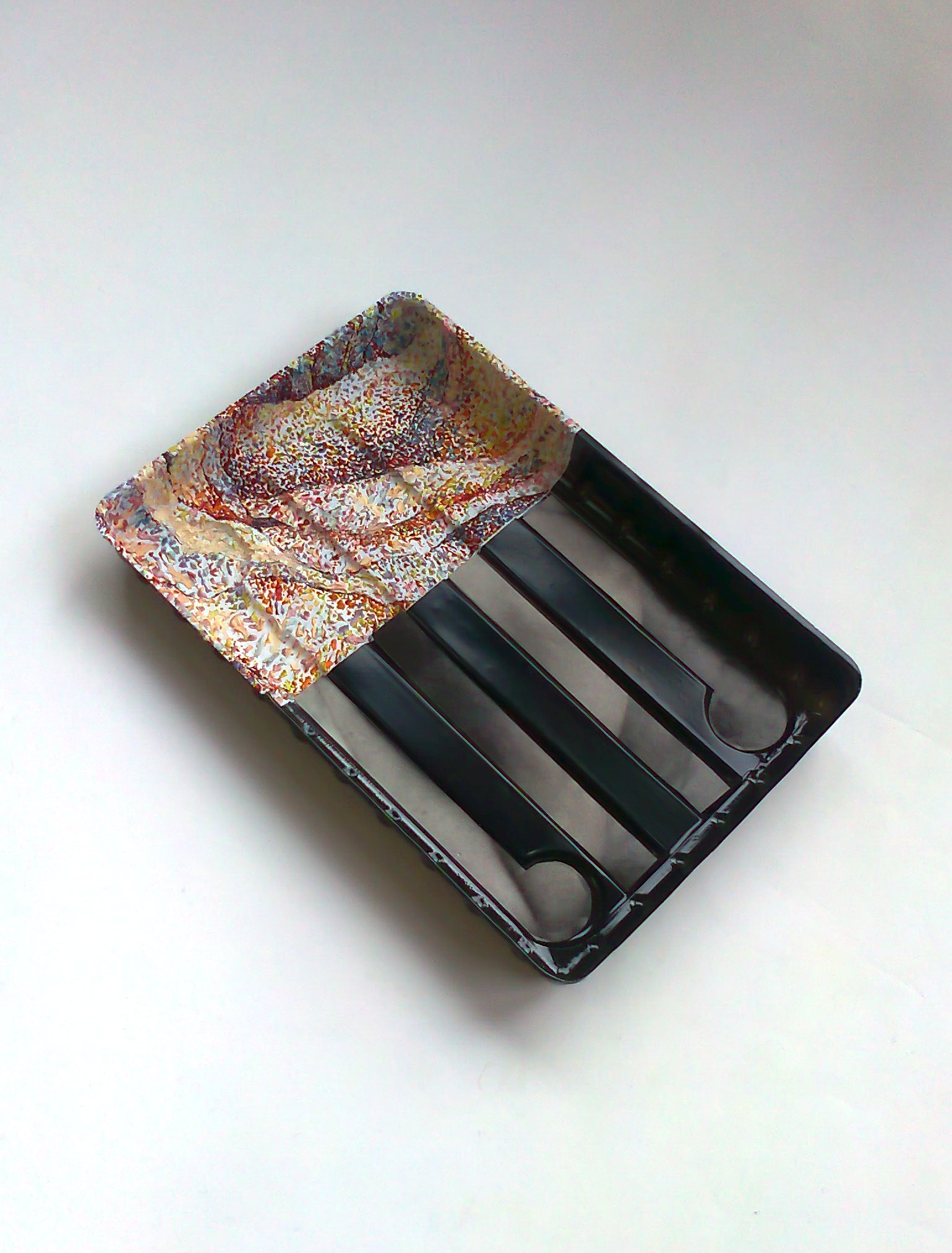 Black bars lock a shoulder and forearm behind the bolts of a deadlock, ratifying their visual integrity. Offered up on the prongs of a pivotal fork, vulvic petals drape themselves over the bolts. The photograph takes us in, behind the scenes to the corolla’s relinquishing of hermetic passivity. 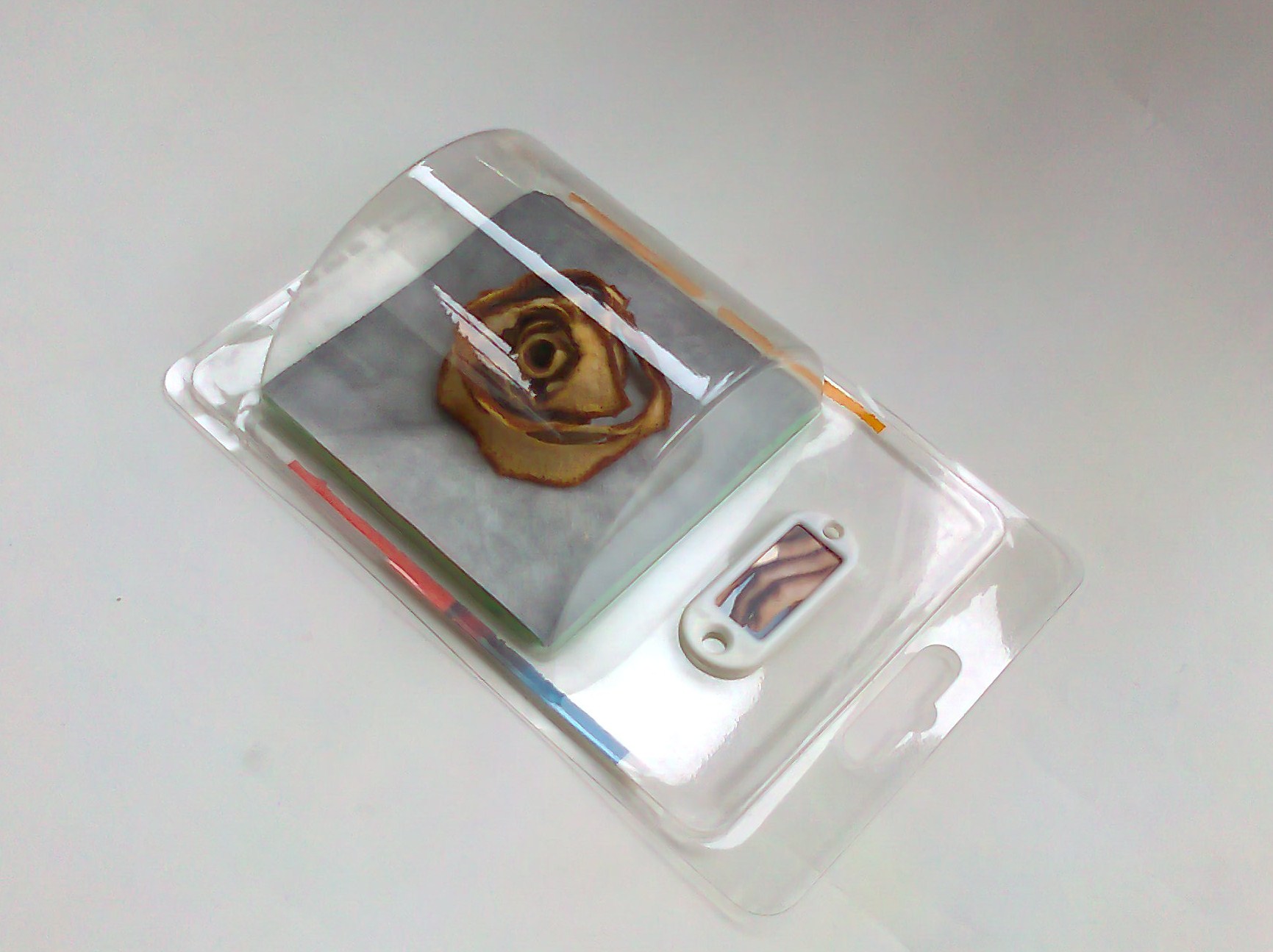 And all our yesterdays

It sits in an isolation chamber, a display case, a rudimentary incubator, an upturned gutter. Outside the guttered dome, in a white key fob, pent-up fingers march or drum, signaling impatience, hostility. The ends of the fob are curved like a gutter, but compressed, leveled. The corresponding structural and functional similarities between the upended gutter, with its decaying incumbent, and the fingers in the fob, suggest they are relatives of one another: a co-dependent, ambiguously parasitic, elision of confinement and cultivation, construction and separation, propagation and contamination. Excluded from the upended gutter, yet on the same island of transparent plastic, the fingers in the fob form a fleshy grill or vent. Unravelling the rose’s coiled desiccation, the fingers sift and parse its deterioration, filtering the airs and graces of its slow decay. 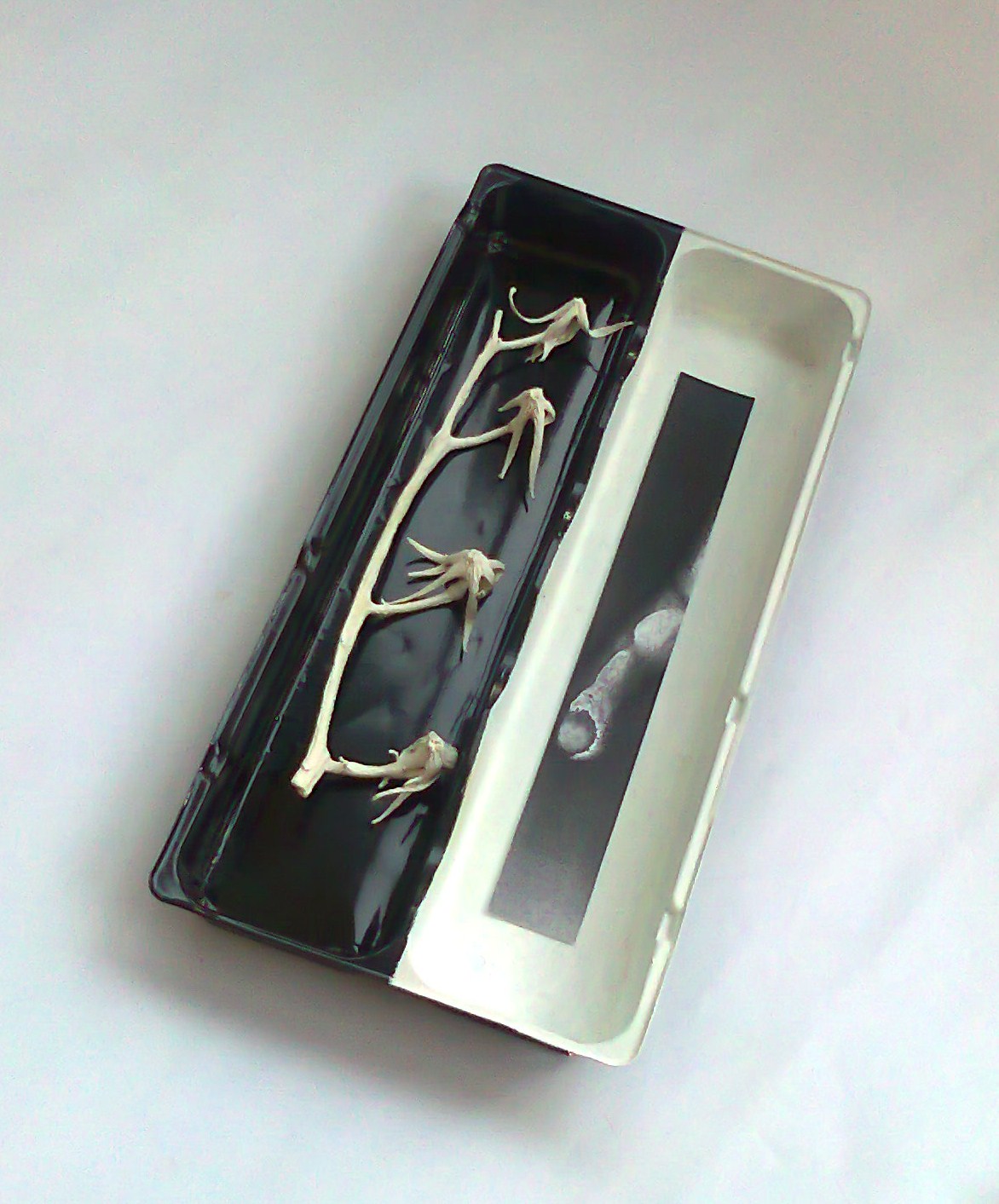 The stalk is frozen in an intoxicated stupor. On the ends of bleached bones, paralytic sepals try to get to their feet. Petrified at the appropriation of their stock-in-trade, their means of propagation, they sink into a bituminous pitch. Opposite the plastered stalk, embedded in a tailored recession, the underbelly of a forefinger kicks up a jaded fingerprint – a grey horseshoe nimbus – as it beats a hasty retreat. 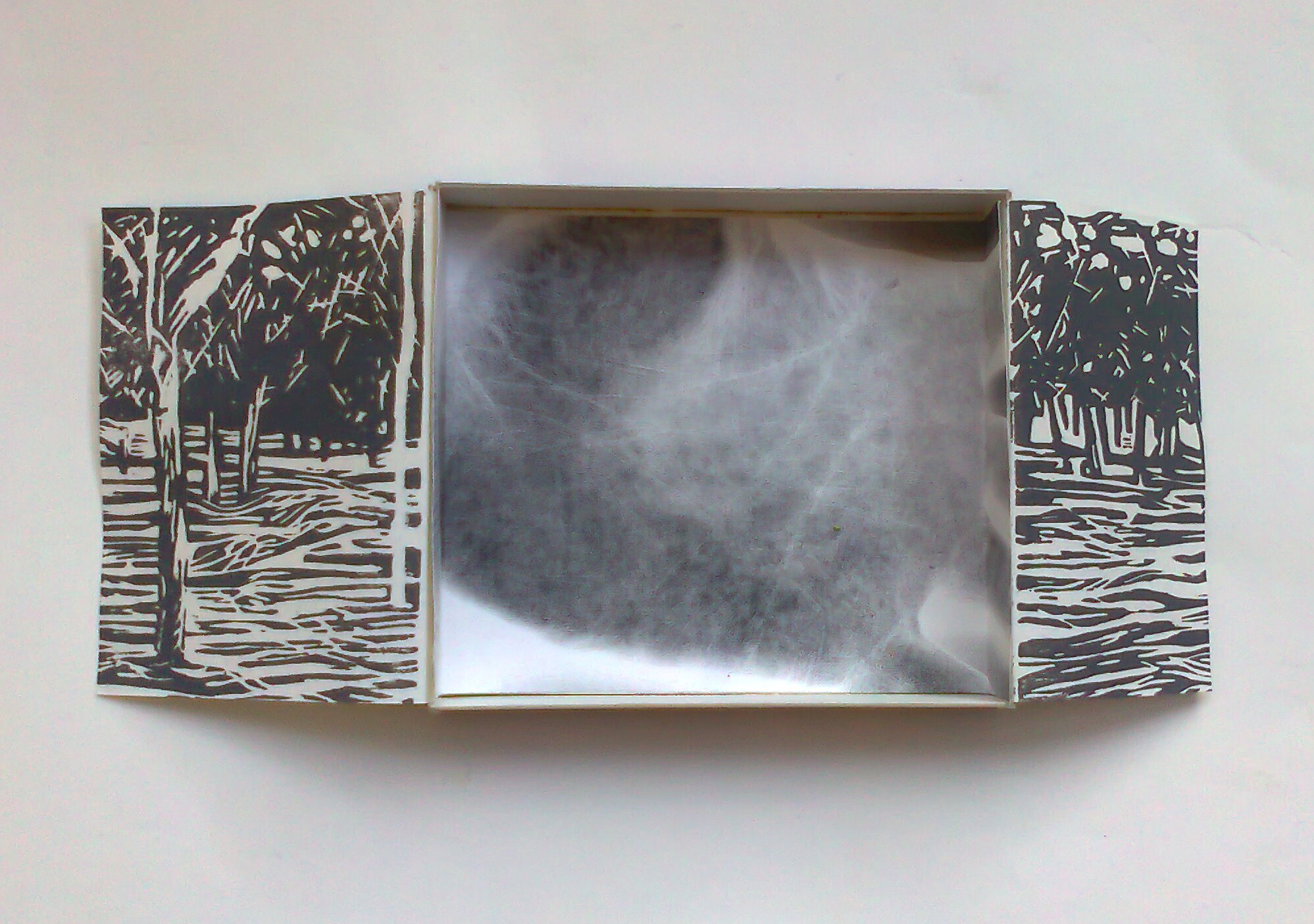 Curved slipways open outwards. On the surface of the slipways an image of a receding forest of saplings has been printed. As you look through the saplings the palm draws you back to the moment of the print’s creation, when a piece of paper was placed over inked-up linoleum, after the extraneous material had been cut away. 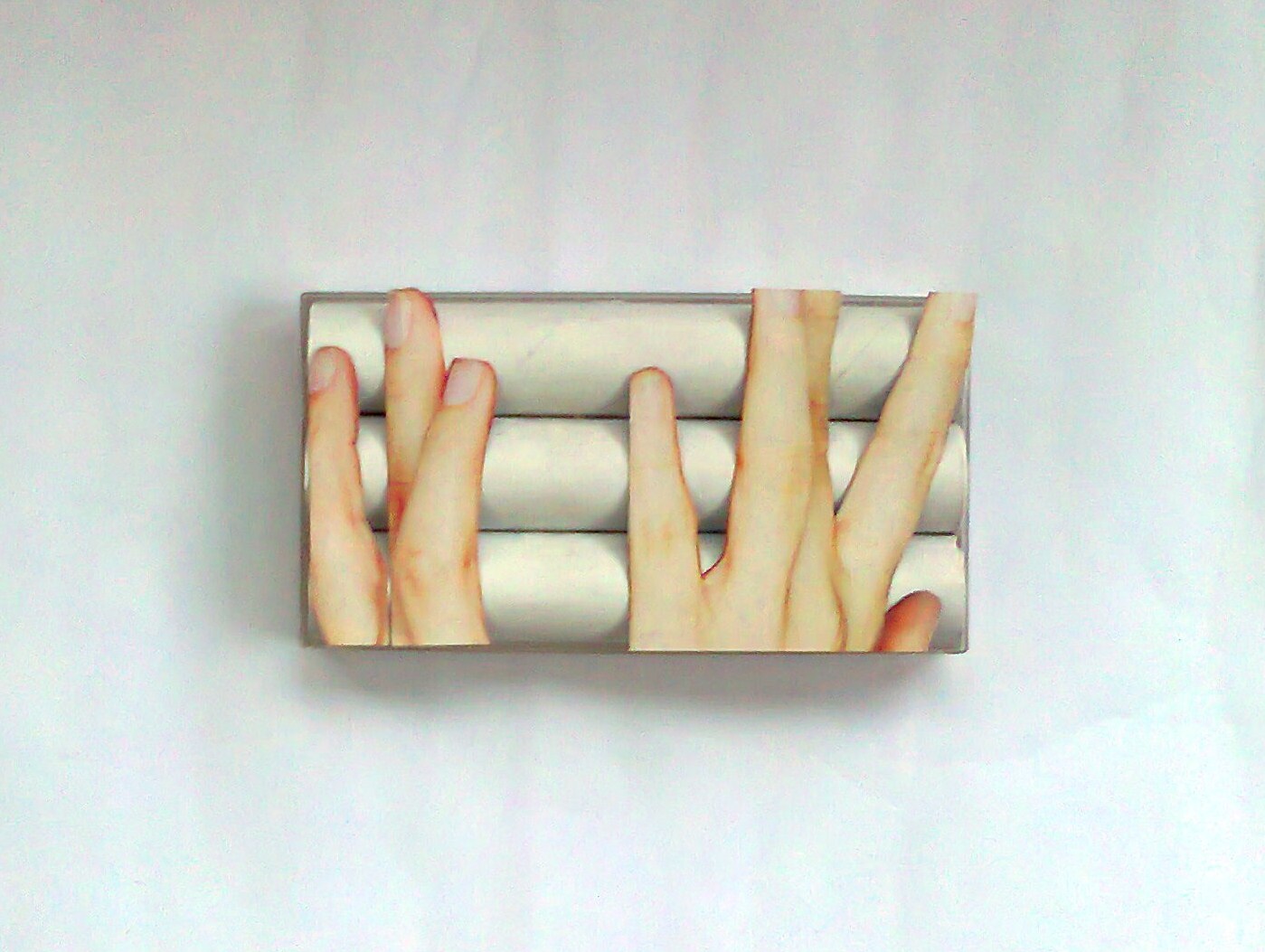 The scream (waking from the dream of life)

At the borders of the grill the fingers have been hacked off, guillotined into agreement. 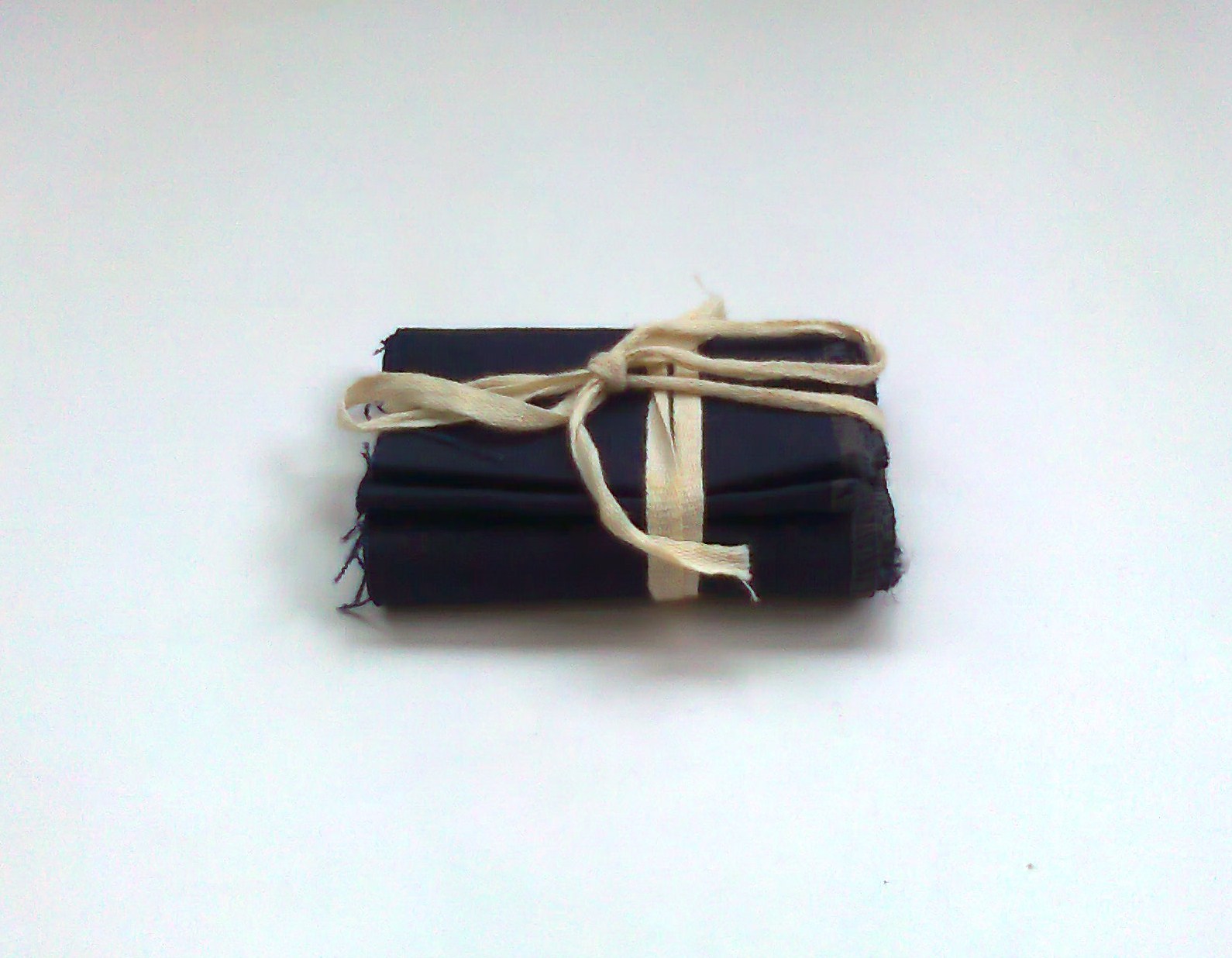 The opening into the plunge pool has been wrapped up, folded away. 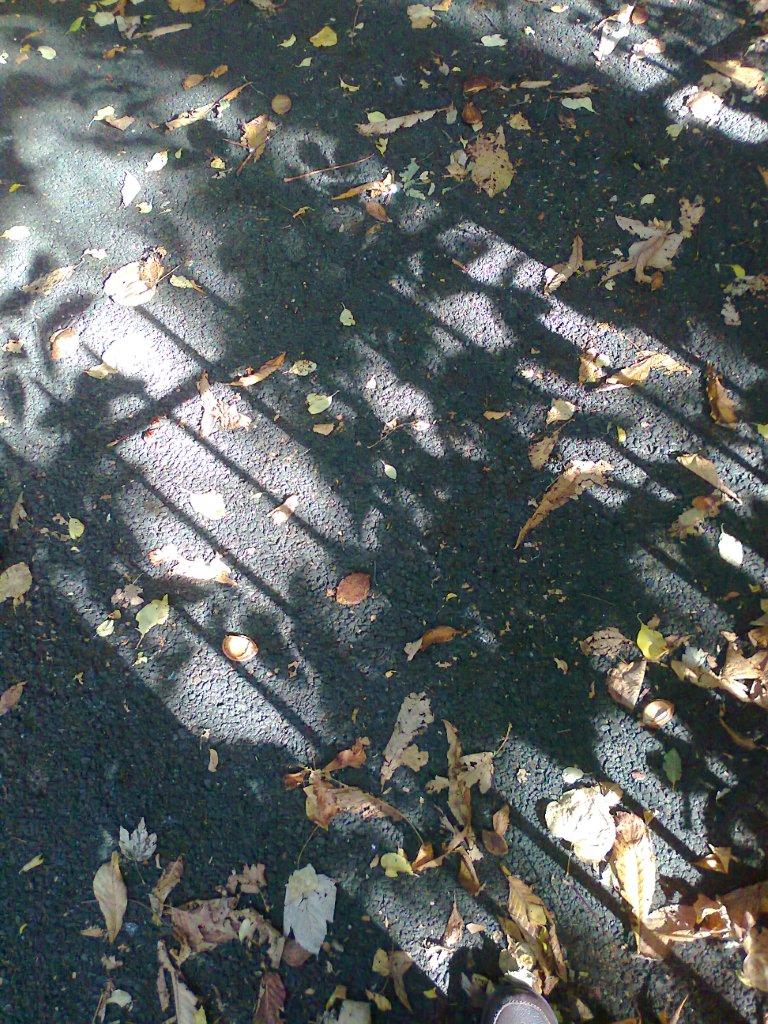 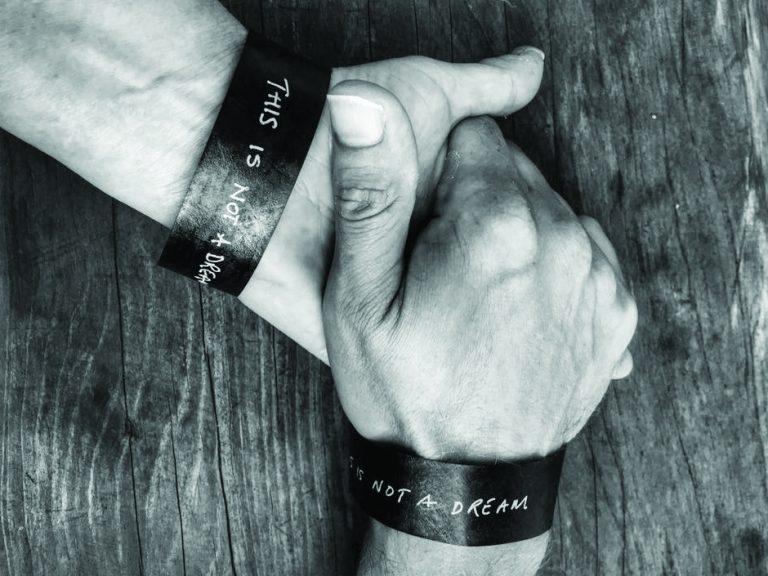