Things by Ceal Floyer is, at heart, a willfully unsatisfying show, teasing the viewer with morsels on an otherwise clean plate. The Project Arts Centre gallery is filled with identically sized white plinths, approximately four feet high, each fitted flush at the top with a white speaker grille. Despite the generous array, the room feels empty. At irregular intervals, internal speakers play a short song clip from one of the plinths, sometimes overlapping. The audio snippets consist of isolated song fragments; in each tiny excerpt the word ‘thing’ – the ultimate banal noun – is sung. There are about thirty different examples, from various genres, lasting from a fraction of a second to several. 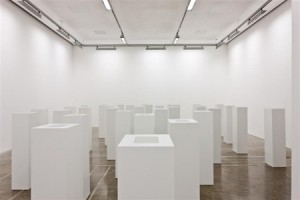 Almost all of these audio clips are too short to recognise, which enhances the experience, as this is not a show about being drawn into specifics, reveling as it does in non-commitment. Typically for Floyer, the work is as simple and as beautifully constructed as a Stephen Wright one-liner. Frustrating as this may sound, meandering through the room in anticipation of the next excerpt is an agreeable experience, the plinths scattered placement necessitating non-linear movement, with the audio randomly triggered. Or was it? My fellow audience members thought not. Most of the dozen or so people in and out of the gallery during my visit attempted to trigger the clips with a variety of physical gestures, but despite comparing notes and theories, the visitors’ cause and effect remained ambiguous. This contrasts with many of Floyer’s other works, which, like generous magicians, explain their tricks after performing them. 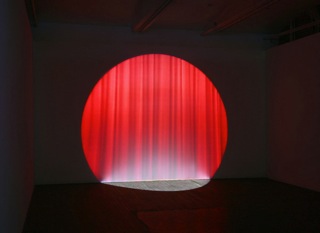 In Double Act (2006), a theatre screen is revealed as a two-dimensional hoax, projected onto the gallery wall. Similarly, in Light switch (1992), a plinth-top projector produces the image of a light switch on a wall with actual light, the pleasure she explains coming via a “recognition of the means of producing it.” [1] Things however, is very much about avenues of frustrated enquiry. The work is finished so cleanly, the craftsmanship so methodical that there should, it seems, be little room for mystery. However, the plinths disguise the imaginary, cagean objects in plain view, with only the occasional wisp of rich experience being crooned over. 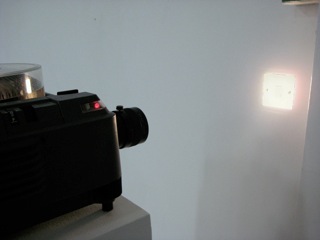 With Things, there is a sublimation of the emotions and connotations of the various songwriters’ ‘things’ creating a sort of void. This operates in a similar way to Michael Landy’s seminal 2001 work Break Down for Artangel, where the artist constructed an industrial de-assembly line which dismantled all his worldly goods to their most basic constituent parts. As a reaction against the significance of the value associated with things – in Landy’s case, a culture of commodification, in Floyer’s, one of information – the concept becomes more tangible than its physicality. The main press and publicity image used for Things is a mock-up of an ‘Error 404’ webpage – the cyber cul-de-sac seen when you can’t find what you are looking for – which in a world connected as never before by a googolplex of frivolous things is a neat flourish.

Floyer has exhibited widely, including two outings at the Venice Biennale. As her first solo exhibition in Ireland, it initially seemed a shame to confine the display to one piece. However, Things deserved the degree of encapsulation to which the exclusive showing of it provided and left me wanting more of Floyer’s less.

Davey Moor is a curator and arts manager based in Dublin.