Aleana Egan works predominantly in sculpture, sometimes incorporating found objects and photography. She creates deceptively simple yet mysterious artworks and situations. Her works—with the materials used in them and the wording of their titles—generate supple frames of reference around them, directing the active viewer to and from particular moments in literature, film, fine art, photography, etc. She recently joined the Kerlin Gallery, Dublin, and The Sensitive Plant, her first show with them, comprises a number of wall and floor-based sculptures, and a series of photographs. [1]

At either end of the long and narrow gallery space are two wall-based sculptures titled the mossy roofs and the sky looks down on almost as many things as the ceiling. The first is a white rectangular shaped sculpture, about four feet in length, made from strips of cardboard, and held together with a mixture of filler, varnish, and paint. It seems as if it wants to hang from its fixings, but something in the internal stiffness of these materials gives the work a certain suspended unease. The whiteness of the work upon the gallery wall has the effect that from a distance all that can be seen of the work itself, is the shadows it generates upon the wall. 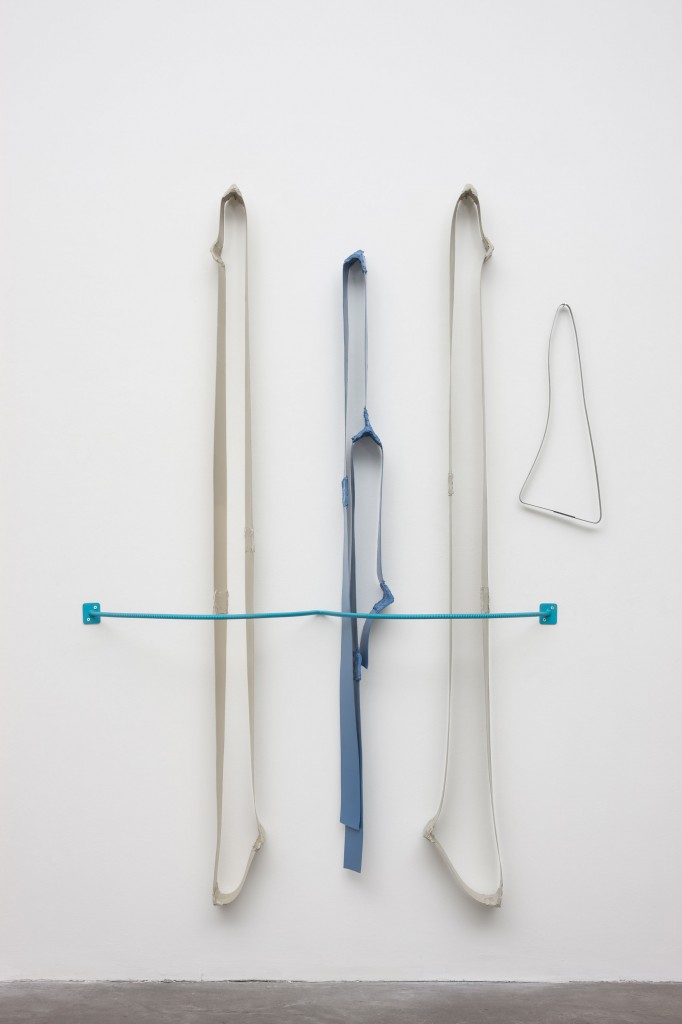 Aleana Egan
the sky looks down on almost as many things as the ceiling
2013
Card, tape, filler, varnish, steel, 204 x 152 x 25cm.
Courtesy of the artist and Kerlin Gallery, Dublin.

At the opposite end of the gallery there are three more of these cardboard strip sculptures (a champagne-green, blue, champagne-green composition) that hang a little more lucidly. Gathering these three sculptures into the wall is a bent-open hoop of light-blue reinforcement bar, and to the right of this arrangement hangs a smaller version of the cardboard shapes, here fashioned with a strip of mild steel—which seems to mimic being-at-rest.

The titles of these two pieces places the visitor between a roof and a ceiling, i.e. into an attic space of sorts, an uncertain area of a dwelling, and it is this sense of uncertainty that pervades the show on many registers.

For example Meanwhile, a large steel-frame work placed two-thirds of the way up the gallery is a construction that is at once free-standing, while also requiring lateral support from the wall. It looks like a Victorian green house, reduced and compressed into a series of tubular mild steel frames. These frames are constructed in separate sections that fit together with some precision. Draped over the outer frame of this piece to the left hand side of the ‘façade’ is a printed sheet of fabric. It disrupts the symmetry of the work, alters its ‘use’, but it also elucidates a gap in the languages held by the materials being used, i.e. an unspeakable absence is tendered between the limp fabric and the machined mild steel support—it also somehow suggests a rise and fall in mood and light.

Nearby, daily air is a ground-based work comprising a thin, perforated / patterned, five-foot square sheet of stainless steel upon which sits a white, opened-out plaster cast, from the centre of which extends a slim tendril of wire into the space that the cast itself appears to be cradling. 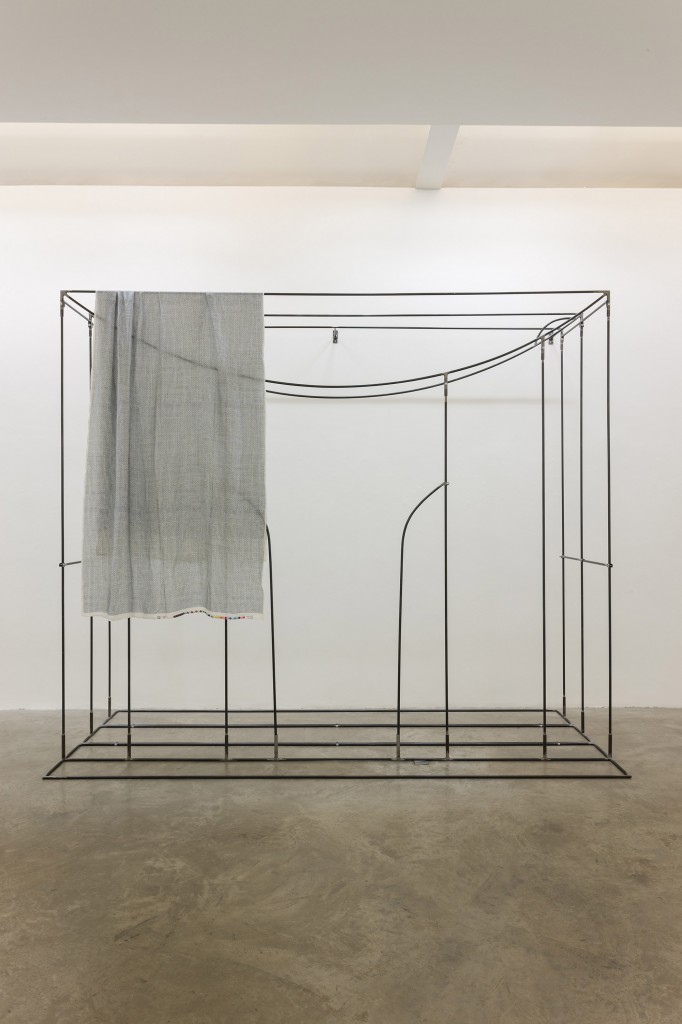 Walking around these works, however, is a somewhat constrained experience; one feels directed, and this direction doesn’t sit easily with the expansive nature of the works individually or collectively – they appear to want to ‘breathe’ more. Some of the titles of the works in this show have literary references, but they also suggest spaces for living in, and within that a sort of ennui or a human longing, particularly with: the harbour is good company (steel and fabric sculpture), clothes real sad here now world (a diptych of pigment prints), and life group a. The latter is another ground-based sculptural arrangement, comprising a rolled out floor mat, upon which lies a bouquet of fabric and wire-mesh, propped up on a red cardboard box with the words “Gammel Rött” on it. This old box—once a product to buy—contained (or perhaps still does contain) red pigment. It also has an image depicted on it of a rural German setting, with a mansard-roofed country home to the foreground. Encasing all of this is an angled white, tubular steel frame. 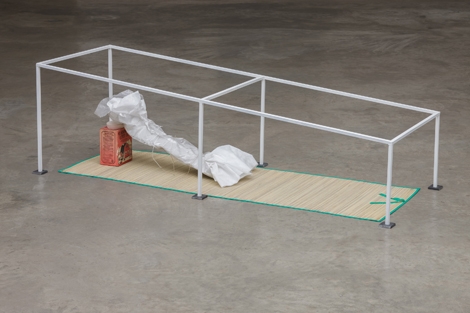 Colour pigment makes an appearance throughout this show, particularly red pigment, which has, of course any number of violent / erotic / passionate connotations. Pigment is also a raw, first principles material used in painting to create the immaterial experience of colour, and maybe it is in this over and back between the material and immaterial, certainty and doubt, stiffness and flacidity, light and shadow that Egan’s work can be visited and re-thought from, over and again. Perhaps like the retracting plant referenced in the title, fully deduced meanings here also remain elusive—an elusiveness that comes from something being unsayable, as opposed to it not-being-said.

Adrian Duncan is an artist and writer based in Dublin and Berlin. He has also been published by Sculpture and The Dublin Review.

[1] Written in 1820 by Percy Bysshe Shelley, “The Sensitive Plant” was published in the same year in the collection Prometheus Unbound and Other Poems. 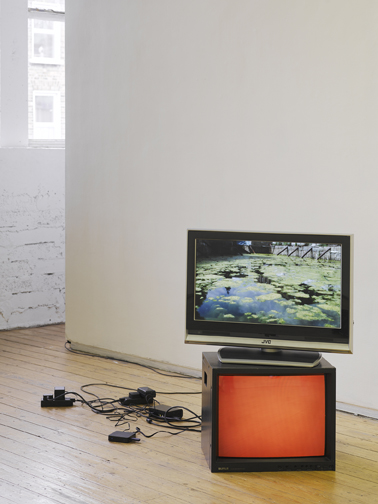 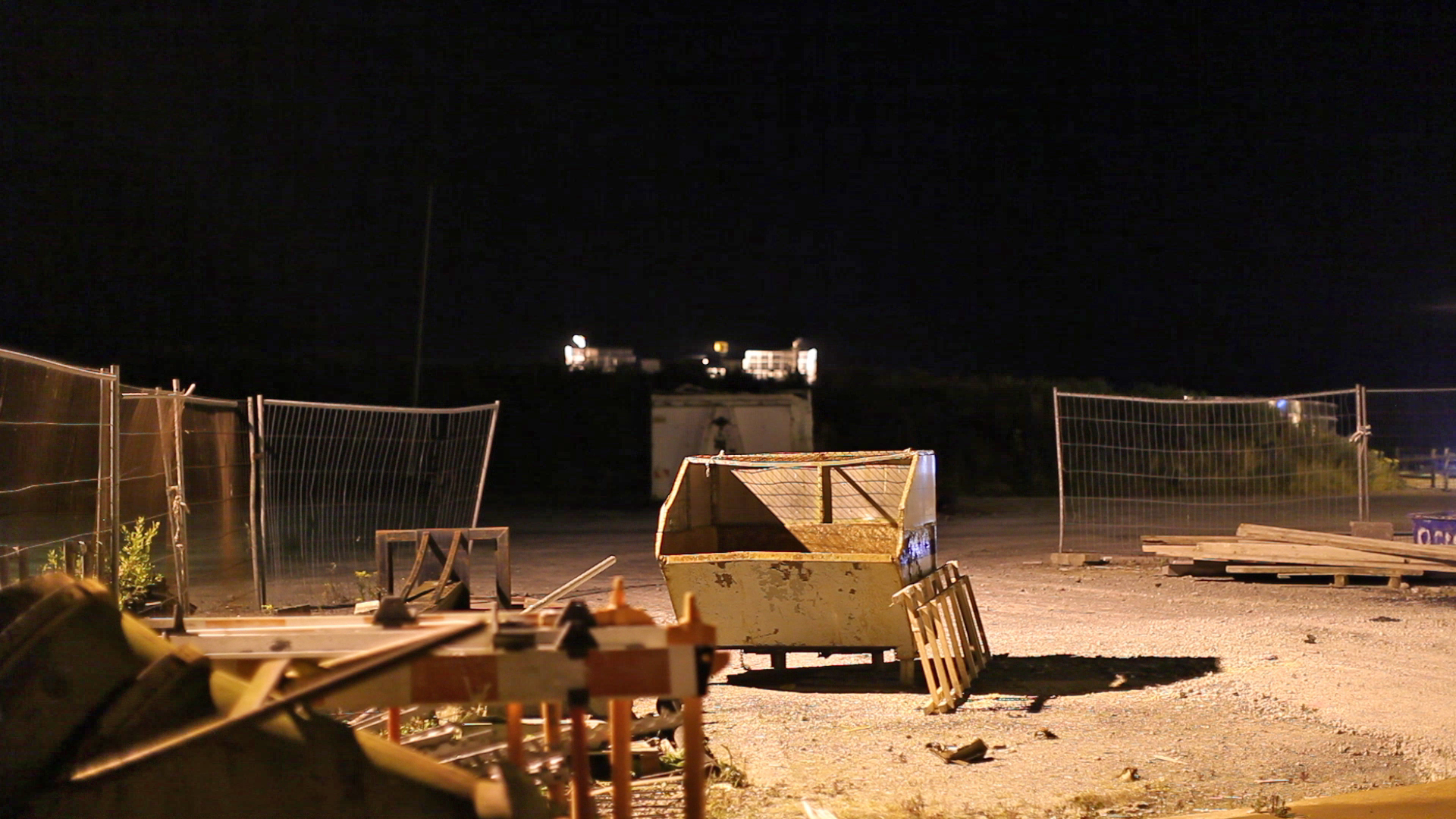