The mildly notorious Knitting Map must at this stage be something of a curatorial albatross. An inert, sludgy pool of wool, it meets visitors to the Glucksman Gallery at the top of the stairs, like an oversize prop from a low-budget fairy tale. Exhibited here to mark its tenth anniversary, The Knitting Map was one of the major beneficiaries of funding during Cork’s Capital of Culture in 2005. The project, conceived by Half/Angel, used software to track traffic, weather, and movement patterns in various areas of the city. This data was then translated into a knitting pattern to be fabricated by an army of volunteers. As a concept, doubtless, it ticked many boxes for those dispensing funding – it engaged the ‘community’, it was ‘collective’, it employed sophisticated ‘technology’ and cosy ‘craft’ simultaneously. However, it was woefully, albeit gleefully misinterpreted by the media and became a lightning rod for those dissatisfied with the City of Culture’s planners and programmers. The project, its gestation and reception, has been exhaustively contextualised here with framed newspaper clippings. (Irritatingly, the clippings are not always accompanied with the corresponding dates or places of publication.) For a work that generated so many column inches, it is grimly unprepossessing in the flesh. 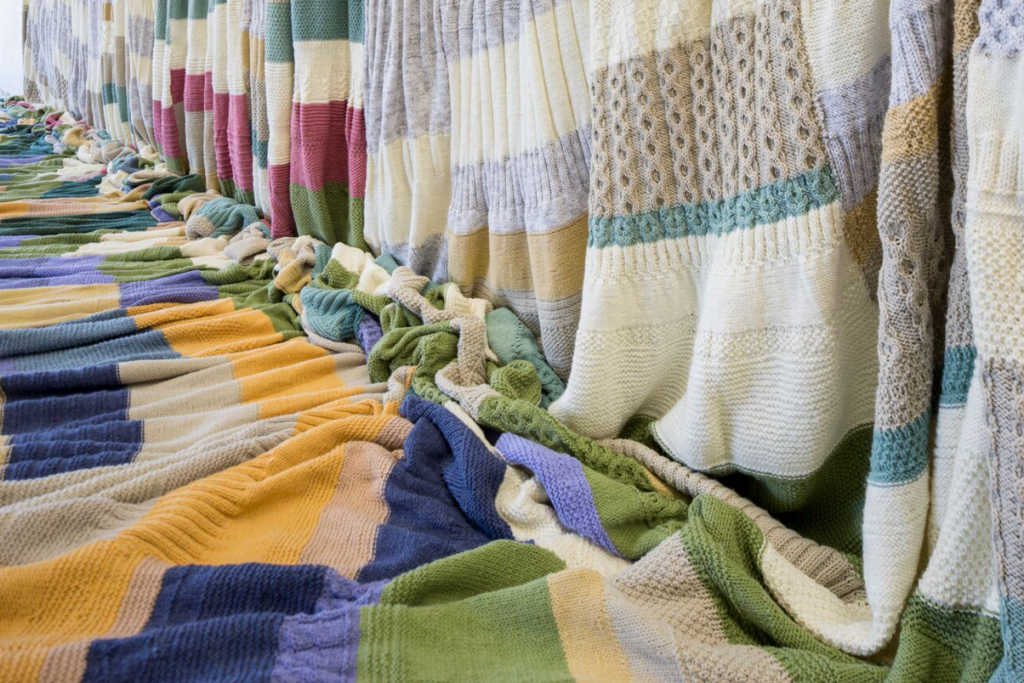 The Knitting Map is in formal terms simply enervating and dull, it is its framing here that is particularly problematic. The exhibition’s title explicitly presents the work as controversial, yet this controversy is insufficiently explored or questioned. Simply re-presenting the newspaper coverage (without adequate citation) doesn’t do enough to articulate how the work was received or how the controversy arose. This is a missed opportunity. Running in tandem with The Knitting Map show – and offering a refreshing corrective – is Stitch in Time: The Fabric of Modern Life, an exhibition that looks at the use of fabric as both a fine art medium and as a medium for socially engaged projects, from the modernism of Bauhaus, through to contemporary practice. A particularly telling comparison with The Knitting Map is presented here by the relics from Jeremy Deller’s 2009 Procession.

Procession was a parade programmed for the Manchester International Festival, giving various groups of Mancunians an opportunity to celebrate themselves: boy scouts and boy racers, unrepentant smokers alongside local goths and emo kids, many of them marching under traditional trade union banners made by Deller’s long-time collaborator Ed Hall. Like The Knitting Map, the project employs a craft not generally associated with fine art facture. A selection of the banners is presented at the Glucksman as the trace of the public, collective performance, a film of which plays on a small monitor. The banners are not wholly successful here – they are hung flush to the wall in a way that somewhat neutralises their impact. However, in contrast to the leaden earnestness of The Knitting Map, Procession seems at least inflected with the humour and warmth of the participants, rather than reducing them to machinic components spewing out yards of blanket. Angela Fulcher’s precise and restrained sculptural works signal a marked change of pace. Fulcher’s practice often recoups outmoded textiles, here some queasily florid 1960s carpet, a neat triangle of which hovers of above the gallery floor. Its busy pattern has been broken up by a crisp triangular inlay of similar but differently patterned carpet, its coolly logical geometry interrupting frowsy domestic psychedelia. Equally, a semi-circle of slippery nylon dress fabric suspended from a wooden banister becomes something quietly beautiful, the liquid weight and fall of the fabric animated by a cleverly directed fan. Such deft, yet restrained and precise interventions allude to changes in taste, fashion, the domestic interior, and class without falling into familiar and lazy attitudes or judgements. Grayson Perry navigates similar terrain but in a wildly different register. Comfort Blanket (2014) is a massive, cinematic tapestry in vivid hyper-colour – a dense collage of slogans and symbols relating to class, taste, and identity, articulated in his now trademark brash but absorbing aesthetics. Comfort Blanket celebrates hoary old tropes of Britishness, tea and horse racing and the Queen, but puncturing any cosy jingoism with flashes of acerbic wit. 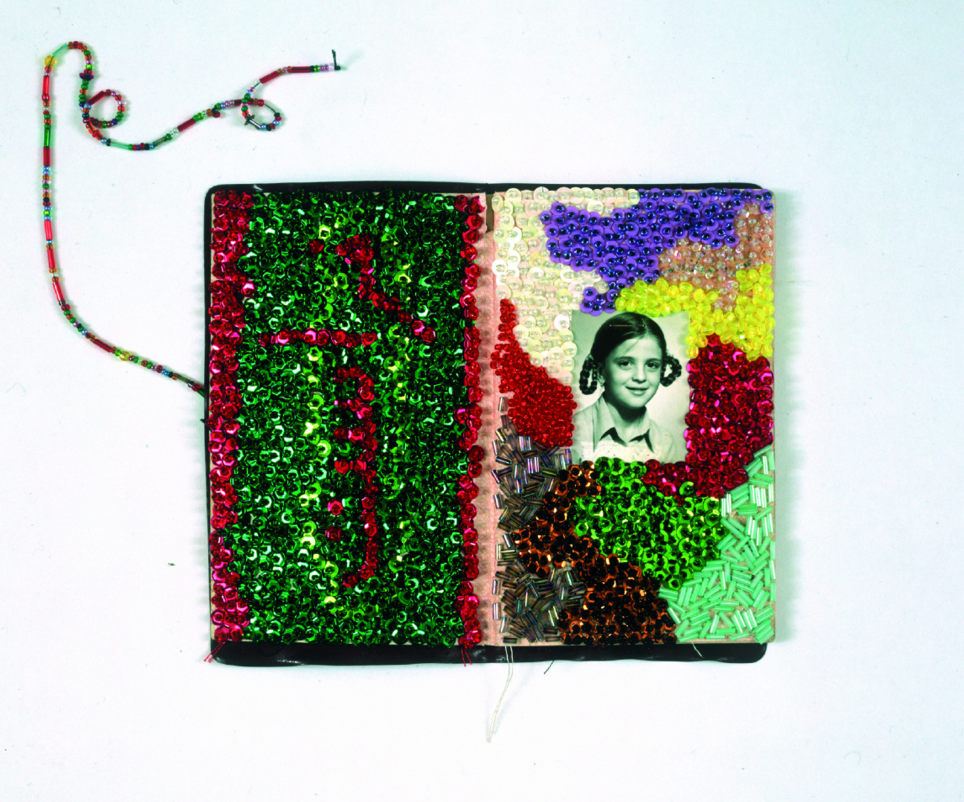 The works of Slavs and Tatars and Sissi Farassat deal more explicitly with the politics of identity. Slavs and Tatars is a  collective of artists engaged in uncovering overlooked relationships between regions, languages, and ethnicities ‘east of the Berlin Wall and west of the Great Wall of China’. Two of their Love Letters (2013) series are presented here: woollen carpets woven with images referring to the politics of language and the wrenching experience of having a foreign language imposed on one’s native tongue. Fascinating in their historical and thematic complexity, the monochrome carpets are perhaps most effective as a spur to curiosity and a prompt to further reading. Farassat’s beaded passport covers are more immediately accessible if less satisfyingly complex. Born in Tehran, Farassat moved to Vienna in 1978 and her hand-beaded passport covers are a mash-up of Persian and Viennese aesthetics. At once kitsch and naive, her saccharine, glittering surfaces remain strangely lumpy and obdurate; this twinkling glamour has something steely about it. In the midst of the exhibition, the work of Bauhaus artist Anni Albers, gorgeously installed in the Glucksman’s central light-controlled chamber, feels like a separate show entirely. The mission of the Bauhaus was to bridge the gap between craftsmanship and industrial manufacture, to create accessible, utilitarian design that sought beauty in the functional. Limpid in their restraint, Albers’s clean-lined abstract patterns in lurex, cellophane, jute and twine, are hung like banners from the ceiling – a serene temple to modernism. Next door, Sarah Browne’s A Model Society, a rather plodding exploration of Icelandic attitudes and knitting patterns, seems trite and affectless in comparison. 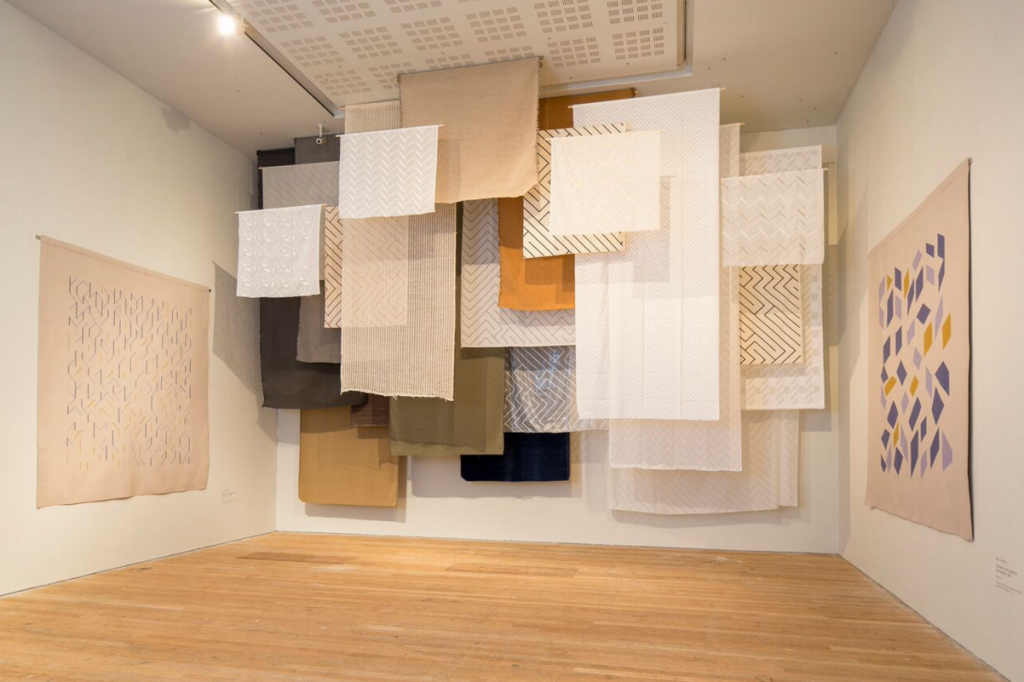 This show has within it the seeds of several potentially compelling exhibitions. One could make a genuinely thought-provoking show about the use of textiles in socially and politically engaged artworks, or recouping textile-based craft to make insightful work about changing attitudes to taste and class, or how female artists have used textiles to critique received ideas about gender. However, by dealing glancingly with all of these ideas, Stitch in Time ends up feeling somewhat unfocused, giving the impression that its curators have employed only the broadest possible criteria – artists who have used textiles to make work.

Sarah Kelleher is an independent arts writer, a Government of Ireland Scholar and a PhD candidate in History of Art at UCC. She is an assistant editor at Enclave Review and co-founder of Pluck Projects. This review was originally published in our hard-copy edition Paper Visual Art: Blueprint (October 2015).