At around the halfway point of Beyond guilt #1 (2003)[1] , Ruti Sela and Maayan Amir are bargaining with three men in a Tel Aviv nightclub bathroom. A red light in the ceiling shrouds the room and there’s music pulsing in the distance. Following a conversation about the men’s time in the army, Sela asks her interviewee, who is sitting on the toilet, if he would like to trade his necklace for oral sex. The men laugh at the suggestion and Sela bluntly asks again, this time suggesting a variety of sexual favours that she will simultaneously perform on the three. Her offer meets with a bit of arguing amongst the soldiers; the interviewee suggests in explicit detail what he hopes Sela will do, and says that he’ll only give her one jewel for her offer. He then coyly chides her for thinking that “boys are all whores.”

The film was part of Beyond guilt trilogy, an exhibition by Sela and Amir, which took place at 126 Gallery, Galway during May and June. The trilogy consistently follows setups like the nightclub scene: Sela and Amir insert themselves into situations where they are expected to trade sex casually, they then record interviews with their trader.

After a cut, we see the three men from the bathroom putting their clothes back on and Sela asks, “have you shot your guns? How did it feel? Did it give you trauma?”

For the second film Beyond guilt #2 (2004), the artists contacted a series of men through a dating website and arranged to meet each one in a hotel room for thirty minute intervals. The film opens by flashing through an image of the artists, and on through clips identifying each man by his website username. This montage is set against with a thumping Fischerspooner song, similar in style to the nightclub music of Beyond guilt #1.

Amongst the fifteen men featured in the piece, around five are interviewed at length. In one scene Amir is meeting ‘man_34’ in her hotel room. As she lets him through the door he quickly strips off his clothes, and while doing this he boasts about his wealth, how he doesn’t care about money, and expectedly how impressive his ‘weapon’ is. No doubt he had prepared that euphemism in advance. He gets into the shower and scrubs himself down; Amir is holding the camera. After he has dried off she walks over to the bed and sits on top of him. At this point the scene ends. Later, he reveals to her that he has become wealthy, at least in part, by robbing 10,000 dinar from “some Arabs.” 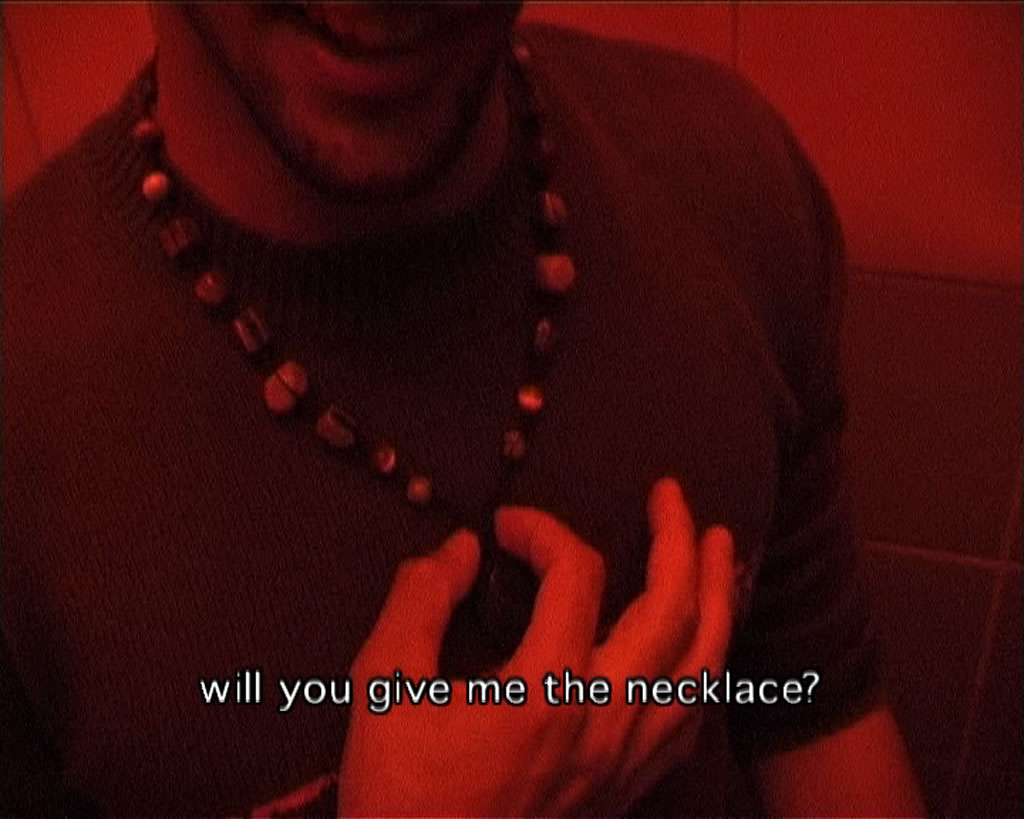 Later on, a longhaired man called ‘truth_master’ arrives to the hotel room. Amir lets him in; he toasts his mother-in-law and begins to unpack sex toys from his bag. Sela sits down on the bed and begins to interview him: “Look,” he says, “I’m someone, as you see like, full of self confidence. It’s not that I’m vain, I just know exactly my worth, and it goes swell on the Internet. Allow me as the opening of a pin and I’ll open up your world.”

‘Truth_master’ asks Sela whether in her adventure of meeting men in hotel rooms if she is afraid of being attacked by thugs. She affirms. Then, out of the camera’s view, he reaches over to her with some implement, and she yelps and recoils in pain – a reaction that he finds quite funny. He boasts a bit more about his experience as an army sergeant saying that it is a suitable position for him because he likes having authority and prefers to hurt, tie and humiliate. Later on, we see him jumping on the bed in his Spiderman boxer shorts. 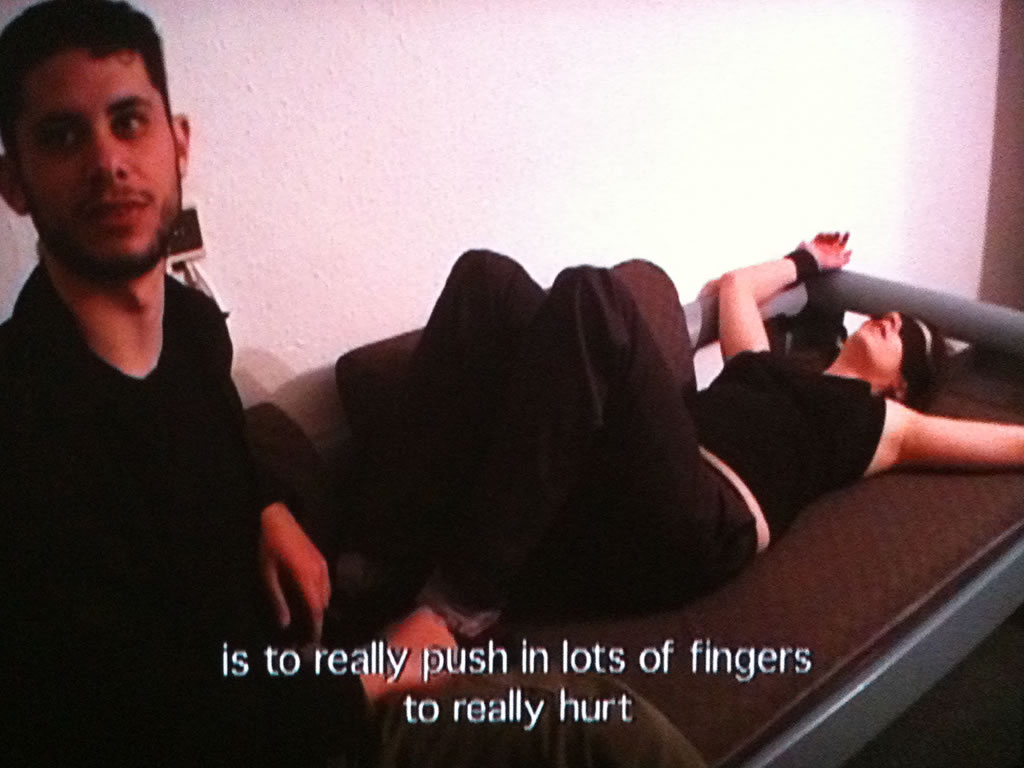 In October of 2005, Sela and Amir hired a middle-aged prostitute. They took her to a hotel room and asked her to shoot the final film of their trilogy. Beyond guilt #3 (2005) opens against dreamy pop music and sees the camera turned on the two artists – we never see the woman’s face.

The normal direction of the interviews is the same; Sela and Amir still ask the questions, but the setting is quieter. Their interview focuses on the woman’s life in city’s sex trade. She recalls: “When I was seven years old someone tried to rape me. He was an Arab I think, or a young man, I don’t know, I really want to be a man because it’s just… I don’t know.” The woman goes on to say that it’s simpler to have an abortion than it is to uproot a tooth. Then she rests the camera on the table for a while, and the artists slip out of the frame.

In the final scene, Amir is wearing a grey mop top wig and Sela has a pair of silver bunny ears on her head. We finally see the prostitute, who poses for the camera in a tiara and cat mask. The film ends with an extended shot of the three lying on their bed in costume. This lasts for around five of the film’s fourteen minutes, and is accompanied a Joanna Newsom song.

Between the three films, the most pressing and difficult question is what the artists are actually intending to say in their work.

Clearly they have a thematic point about the power relations between men and women, particularly in light of the fact that here, the women hold the cameras. And beneath this, we can see the interpersonal politics of a society that perennially conscripts its youth into military service. Indeed this much is covered by the exhibition’s press release.

What is unanswered is the fact that throughout Sela and Amir’s interviews, they pretend not to have an agenda, and they never produce any moral judgment. No matter what the situation. Yet they place themselves into situations that prompt lasting moral questions – situations that, to me, were profoundly upsetting. For instance, in Beyond guilt #2, ‘Why_not’ has Amir blindfolded and tied to a couch, and talks about wanting to hurt her. This should elicit some kind of reaction, but there wasn’t one. Sela and Amir act like a pair of innocents; their exhibition is extreme, and excellently put together. But I do not know what it resolves, and its philosophy is ominous.

Seán O’Sullivan is an artist and writer based in Dublin.

[1] Ruti Sela and Maayan Amir produced a website in support of the Beyond guilt trilogy, which is located at http://www.beyond-guilt.com/. The site includes short excerpts from each film.